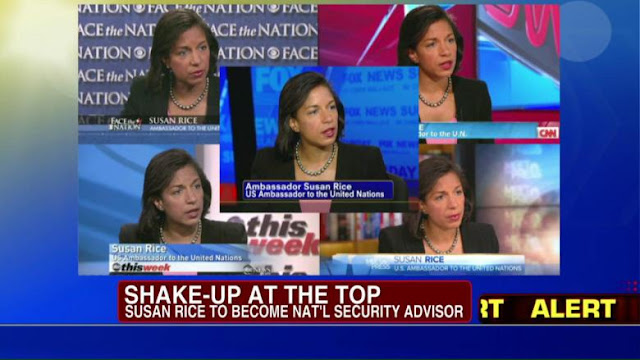 
Susan Rice made the rounds after the deadly terrorist attacks and lied to the American public about a video being behind the deadly assault on our consulate.

The authors of the leaked memo admit that Ambassador Susan Rice lied about the attacks days after 9-11 and before the presidential election.

The memo also includes this bomb: State reduced security at the facility, “a move that was approved at a ‘high level.'”

Here is a copy of the Democrats’ Benghazi memo.

A man who made a film CRITICIZING ISLAM was put in jail as a direct result of the lies of Hillary, Pelosi, Obama, and Susan Rice.

Does the Obama Administration cover up for Jihad because

1) It wants to mitigate the negative effect on "moderate Muslims", or

2) It wants to give Jihadists the cover they need to get away with more?
Posted by Pastorius at 5:24:00 pm