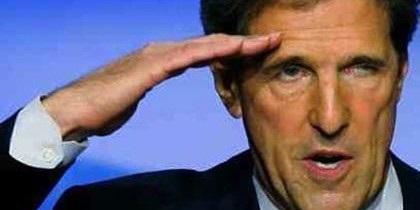 From The Weekly Standard:


During Secretary of State John Kerry’s first official visit to Bangladesh, he met with top Bangladeshi government officials and held a press conference at the Edward M. Kennedy Center in Dhaka. In light of recent terror attacks in that country, Kerry addressed the problem of terrorism, including root causes and how the terrorists spread their message.

The secretary said that the media could “do us all a service” by reducing coverage of terror attacks: “Remember this: No country is immune from terrorism. It’s easy to terrorize. Government and law enforcement have to be correct 24 hours a day, 7 days a week, 365 days a year. But if you decide one day you’re going to be a terrorist and you’re willing to kill yourself, you can go out and kill some people. You can make some noise. Perhaps the media would do us all a service if they didn’t cover it quite as much. People wouldn’t know what’s going on.”

According to Kerry, it would be better if the people didn't know what's going on.

People wouldn't know what is going on?

Tell that to the families who are planning funerals or visiting critically injured relatives in the Intensive Care Unit.

Asshole. The man is a royal asshole.

Keep the people in the misinformed? The MSN has that down pat. The Left is out of it's freakin' minds. And the blatant arrogance displayed is astounding!

I hadn't even thought of that possibility.

Shows how stupid I am.