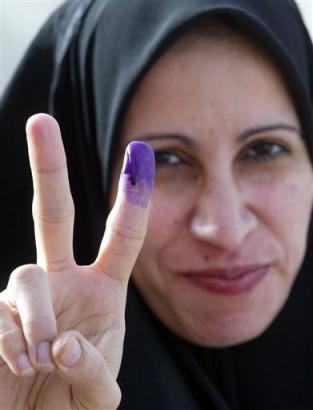 How's That Purple Finger Working Out For You?

The text of a speech given by Andrew Bostom to the American Freedom Alliance:


Col. Douglas MacGregor is a respected military strategist who was a heroic tank commander during the 1991 Iraq war.
As the Gen McChrystal scandal broke in 2010, Col MacGregor, who attended West Point with McChrystal, and was angered by the US military’s disastrous Iraq and Afghanistan “nation building” efforts, commented accurately:
The idea that we are going to spend a trillion dollars to reshape the culture of the Islamic world is utter nonsense.
Successful lobbying for that miserably failed utopianism was accomplished by bowdlerizing Islam—indeed mindslaughtering it, a powerful term I will introduce. My discussion will identify the ultimate source of “gravitas” for that bowdlerization process, and key elements of the Islam—not “Islamism,” or “radical Islam”—bowdlerized.

Tuesday August 2nd, (2016) Khizr Khan, who achieved notoriety for his condemnation of Donald Trump at the Democratic National Convention, had thetemerity to tell Anderson Cooper “I do not stand for any Sharia Law because there is no such thing.” Except when he, Khan, notes it does exist, as in his 1983essay published in the Houston Journal of International Law, “JURISTIC CLASSIFICATION OF ISLAMIC LAW”, which used the word “Sharia” 8X, including this usage:
“All other juridical works which have been written during more than thirteen centuries are very rich and indispensable, but they must always be subordinated to the Shari'ah…”
CNN’s Anderson Cooper did not even challenge Khan’s mendacious, self-contradictory assertion let alone follow-up on Khan’s effusive written praise of two prominent, modern global Sharia promoting ideologues, Said Ramadan, and A.K. Brohi, making plain Khan’s support for so-called “Sharia-based human rights.” The Khan-Cooper exchange illustrates, starkly, the contemporary equivalent of what the great chronicler of Soviet Communist mass murder, Robert Conquest, appositely characterized as MINDSLAUGHTER—a brilliantly evocative term for delusive Western apologetics regarding the ideology of Communism, and the tangible horrors its Communist votaries inflicted. Conquest decried those numerous “Western intellectuals or near intellectuals” of the 1930s through the 1950s whose willful delusions about the Soviet Union, “will be incredible to later students of mental aberration.” He observed,
“One role of the democratic media is, of course, to criticize their own govern­ments, and draw attention to the faults and failings of their own country. But when this results in a transfer of loyalties to a far worse and thoroughly inim­ical culture, or at least to a largely uncritical favoring of such a culture, it becomes a morbid affliction—involving, often enough, the uncritical accep­tance of that culture’s own standards”

His critique of Western media highlights a cultural self-loathing tendency which has persisted and intensified over the intervening decades, and is now manifest in the bowdlerized public discussion of Islam. Tragically, such MINDSLAUGHTERED Islamic discourse extends to an iconic figure in conservative punditry on Islam, while the impact of this doyen’s policymaking advice has been disastrous.
Samuel Huntington acknowledged his indebtedness to Bernard Lewis’s 1990 essay, “The Roots of Muslim Rage,” for Huntington’s book title, “The Clash of Civilizations.” Lewis, as Huntington notes (on p. 213), in 1990, had pronounced,
This is no less than a clash of civilizations—that perhaps irrational, but surely historic reaction of an ancient rival against our Judeo-Christian heritage, our secular present, and the worldwide expansion of both.
Oracle-like font of Islamic wisdom to a large swath of conservative policymaking elites, Bernard Lewis added this caveat:

It is crucially important that we on our side should not be provoked into an equally historic but also equally irrational reaction against that rival.
Despite his own morally equivocating advice, Lewis himself convinced the Bush 2 administration to pursue what became known, aptly, as “The Lewis Doctrine,” which was not only an irrational, but a catastrophic response to the eminently rational Islamic doctrine of jihad.
Peter Waldman’s methodical, well-sourced Feb 3, 2004 WSJ investigative report (“A Historian’s Take on Islam Steers U.S. in Terrorism Fight  Bernard Lewis’s Blueprint—Sowing Arab Democracy—Is Facing a Test in Iraq”) stands as important confirmation of the overarching ideology which spurred the March, 2003 Iraq invasion. Waldman meticulously documented how Lewis exerted profound influence in shaping the Bush II administration’s “Islamic democracy agenda”—invading Iraq being the sine qua non manifestation of this “Lewis Doctrine.” Lewis, as Waldman notes, began evangelizing his “Doctrine” to the highest level Bush II administration officials just over a week after 9/11, accompanied, significantly, by the late Ahmad Chalabi, a likely “vector” of Iranian influence.
Eight days after the Sept. 11 [2001] attacks, with the Pentagon still smoldering, Mr. Lewis addressed the U.S. Defense Policy Board. Mr. Lewis and a friend, Iraqi exile leader Ahmad Chalabi –now [circa 2/2004] a member of the interim Iraqi Governing Council—argued for a military takeover of Iraq to avert still-worse terrorism in the future…
Call it the Lewis Doctrine.  ..Mr. Lewis’s diagnosis of the Muslim world’s malaise, and his call for a U.S. military invasion to seed democracy in the Mideast... As mentor and informal adviser to some top U.S. officials, Mr. Lewis has helped coax the White House to shed decades of thinking about Arab regimes and the use of military power. Gone is the notion that U.S. policy in the oil-rich region should promote stability above all, even if it means taking tyrants as friends. Also gone is the corollary notion that fostering democratic values in these lands risks destabilizing them. Instead, the Lewis Doctrine says fostering Mideast democracy is not only wise but imperative.
Waldman also demonstrated how Lewis successfully indoctrinated the ultimate Bush II administration leadership to pursue his utopian design: President George W. Bush, Vice-President Dick Cheney, and most likely, National Security adviser (and later Secretary of State), Condoleeza Rice, as well.