Leaked Public Policy Polling document describing the truth regarding what is really happening in the presidential race, in this case in Florida:

Leaked Public Policy Polling document describing the truth regarding what is really happening in the presidential race, in this case in Florida:
OVERVIEW: Trump Dominates, Hillary Flat-lines.

Here is a link to the Wiki article on Public Policy Polling:


Public Policy Polling (PPP) is a U.S. polling firm based in Raleigh, North Carolina.[1] PPP was founded in 2001 by businessman Dean Debnam, the firm's current president and chief executive officer.[2] PPP is described as one of the "most accurate" polling companies[3][4] with a tendency to slightly lean Republican.[5]

PPP first entered prominence through its performance in the 2008 Democratic primaries between Barack Obama and Hillary Clinton. The company performed very well, producing extremely accurate predictions in many states ranging from South Carolina to Wisconsin, many of which featured inaccurate results by other pollsters.[11][12]

After the November election, PPP was ranked by the Wall Street Journal as one of the two most accurate firms, among those who were most active in the presidential swing states.[13]


Here's a Screenshot of the Public Policy Polling Page: 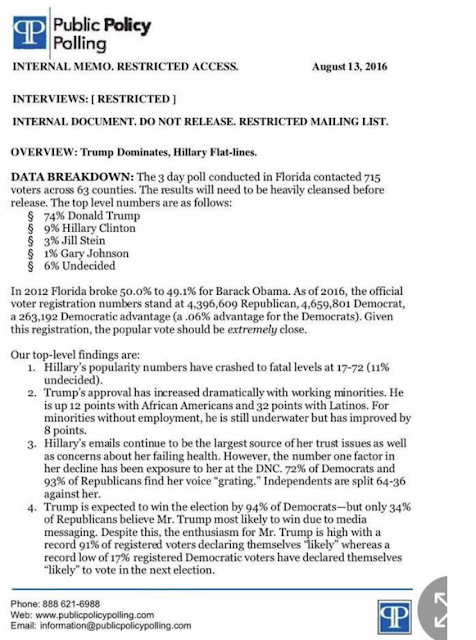