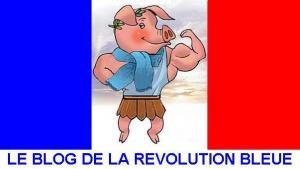 The French are rightly fed up with the Muslim scum people who are rampaging unchecked across the nation, and on Jan. 26 they will don blue scarves in silent protest against the government's complete neglect of the law and the peace in favor of appeasing the feral beasts of Islam who make the lives of all people, including law-abiding Muslims, a matter of major insecurity. Who do the French politicians think they're fooling? They're fooling themselves. The rest of the nation, and the world at large, is fed up, and they won't take it anymore. Good.

What can we do to show our support for the French? And for the Danes? For the Swedes and Norwegians and English and Dutch and everyone else dumped on by the p.c. sentimentalists who refuse to secure the peace in our lands?

We can go to the nearest McDonald's diner, and on Jan. 26 from 7-9:00 pm we can sit wearing a blue scarf, and there perhaps meet other like-minded people and there talk and admit that we don't like the religion of peace and all the violence it entails by virtue of being the eternal word of a criminal maniac and his murdering followers. Go for coffee at McDonald's on Jan. 26. Wear a blue scarf. If you feel that it's too dangerous to do so, then we have lost this struggle and we are doomed. I think not. I'll see you there.
Posted by Dag at 5:14:00 am

An intriquing idea!! Similar to my idea for meeting up in cities across America on the 11th of each month to protest islamic attacks and show that we are still angry about 9/11, which of course could be used in other countries on significant dates (i.e. 3/11, 7/7, etc.). My ideas I believe are still only on my Strange Girl blog, but the link is at my Blogger blog.

Also, my Dutch team member (Herwulf)added a lovely summary of events in his country last night. I'm not pimpimg my own site, I'm just proud of him. He's quite a gem in my opinion, and I consider myself lucky to have found him.

As an Infidel myself, I fully support the "blue revolution" in the making. I have started a blog aimed at explaining what is going on in France and what the objective of this next revolution is.

You can have a look at the following address: http://nextfrenchrevolution.blogspot.com