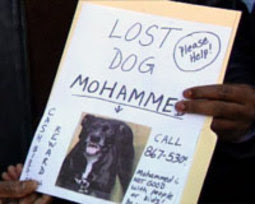 You know, I'd feel bad about poor Mohammed - wandering the streets scared and frightened with nothing to eat - except for the fact that he keeps shitting on my lawn:

LEWISTON (NEWS CENTER) -- Members of the Somali community in Lewiston say a poster put up in front of a local Somali owned store is an insult to their religion.
The poster depicts a vicious "lost" dog named Mohammed. That's the name of the Muslim prophet. It says that the dog is not good with children and can't be trusted.
Hussein Ahmed, the owner of the store, says the phone number on the poster is fake and that the only place it was put up was right near his business. "This is really a religious statement," said Hussein Ahmed, "that is an attack on our religion which we don't feel comfortable with. We see this as a very bad insulting situation."
Lewiston Mayor Larry Gilbert says the poster gives the city an undeserved bad name. Gilbert met with members of the Somali community Friday afternoon to listen to their concerns. He says police are investigating.
Posted by Pastorius at 1:18:00 pm

Larry, it's Lewiston. What kind of name did you think it had in the first place? At least now we know that someone in town has bothered to fact-check Islam and has a modicum of wit. Who'da known?

Mr. Ahmed and the "Muslim community" could always stage a riot complete with "Behead Dogs Who Insult Islam" signs, but it's too damn cold.

It says that the dog is not good with children and can't be trusted.

Bullshit Pastorius! Dogs are God's creatures.....unlike Muslims. Have you ever seen what Somali Muzzies have done to their Christian neighbours "back home"??? Even the wild dogs of Africa have never been so brutal,

You owe Lassie an apology.

Yeah, I knew Koos meant pussy. That's why I thought it was funny. But, I didn't know the Arabic word.

Investigating what? What law has been broken? In fact, the right to pass hand bills is protected by the constitution.

AOW, thanks for emailing this to me, I will add it to the List.

Linked it. On the list it can be found in the Animal category under Lost Dog Poster. Also, IBA has been added to the list of contributing Blogs.

What is up with the police anyway? Can you imagine how a tough guy police man - who became a cop because he wants to put away bad guys - feels about it when he is asked to "investigate" a man who is simply expressing his right to free speech? And, all because some Muslim idiots (bad guys) object.