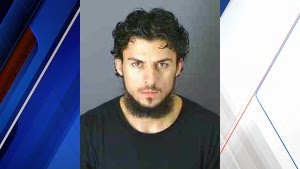 Twenty-six-year-old Nihad Rosic of Utica, N.Y., was part of a group of six Bosnians accused of helping ISIS. He is charged with funneling money and weapons to ISIS in the Middle East as well as conspiring to kill and maim persons in a foreign country.

The warrant for his arrest was issued out of St. Louis County on Feb. 5. He was in the Marion County Jail from Feb. 6 through Feb. 11 before being transported to a jail in Missouri which is where the case will be tried.

These court documents show that Rosic, also known as Yahya AbuAyesha Mudzahid, immigrated to the United States and is a naturalized American citizen. It is unknown why Rosic was in Plainfield at the time of his arrest.

The other five people who were arrested are Mediha Medy Salkicevic, 34 of Schiller Park, Illinois; Jasminka Ramic, 42, of Rockford, Illinois; and Ramiz Zijad Hodzic, 40, his wife Sedina Unkic Hodzic, 35, and Armin Harcevic, 37, all of St. Louis County, Missouri.

But there is no existential threat. Nope, nope, nope!

On the Mark Levin Show Thursday evening, Sue Paine of WCBM revealed that she was accidentally invited to take part in a White House Conference call about Obama’s ‘Executive Amnesty’ orders. audio link

Transcript of this segment of the Mark Levin show...scary stuff!
Some of the information exchanged was: Immigrants should be viewed as seedlings to be planted in fertile soil to grow. The fertile soil was equated to the “receiving communities” which would be those communities the illegal aliens are now living in, but once out of the shadows, these communities become welcoming or receiving communities. The interest was in navigation, not assimilation, and the navigation was through the system, focused on benefits.
...eventually the ‘seedlings’ will take over the host and the immigrants will come out of the shadows and what I got from the meetings was that they would be pushing the citizens into the shadows. They would be taking over the country, in fact one of the members of the Task Force actually said that ‘We would be developing a country WITHIN a country’... “Immigrants need to be made aware of the benefits they are entitled to” which led to another comment saying that this group that Obama is going to pardon or give Amnesty to, would not be interested in assimilating, they would NAVIGATE NOT ASSIMILATE.