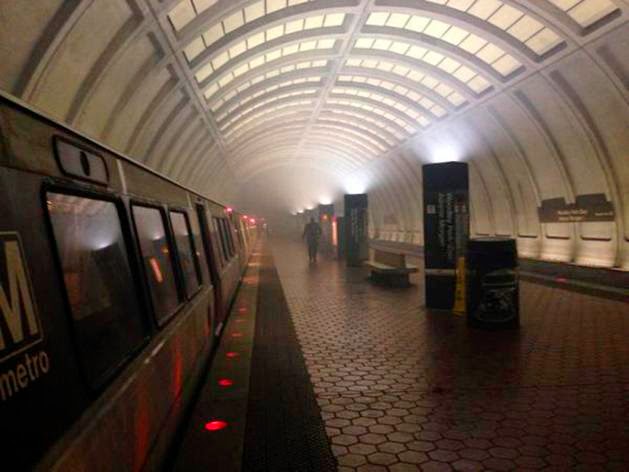 Don't worry, though. It's just a random mechanical failure.

It has nothing to do with Islam.


WASHINGTON (Reuters) - A mechanical failure on a Washington subway train caused smoke to fill a station stop on Sunday in the nation's capital, the third such incident in two days, according to officials.

He said officials were looking to see whether the failure was connected to a recent bout of wintry weather.

On Saturday evening, firefighters responded to a report of smoke and fire on a train line connecting Washington's Foggy Bottom station to a stop in Rosslyn, Virginia. The fire was caused by problems with system's electrified third rail, Stessel said.

No injuries were reported during the incidents.

The three incidents come just one month after an arcing insulator in a tunnel near the L'Enfant Plaza station filled a car with smoke, killing one woman and sending 84 people to area hospitals.

The system, which operates in Washington, D.C., as well as the Virginia and Maryland suburbs, is the second-busiest in the country after New York City's subway network.

I don't recall any such previous incidents happening so frequently. Particularly not incidents with smoke filling the spaces.

Sure, we've had third rails freezing, but not in underground stations such as the ones mentioned in this article.

Maybe I missed the coverage of the incidents. HERE is a recent WaPo chart on the topic; no stats there for 2015.

Metrorail is poorly managed for maintenance and for financial matters.

The above said, my gut says, "Something weird is going on. Sabotage?"

Back in mid-November, I didn't hesitate to ride the Metro Subway, and did so to a Stephen King lecture; the station I used was Foggy Bottom, which his generally considered to be one of the best-maintained stations (GWU and Kennedy Center stop).

L'Enfant Plaza is a major stations for various federal departments (Department of Agriculture) and possibly for the Holocaust Museum.

The other major stations for federal buildings = Union Station, Federal Triangle, and Smithsonian.