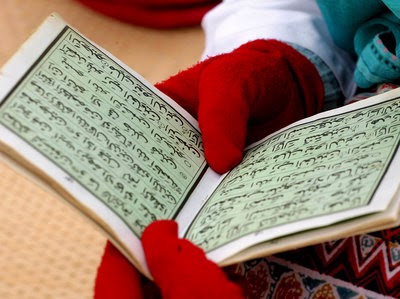 NPR: Finnish Public Broadcasting To Read Entire Quran In New Series
get a load of the photo chosen for NPR: red santa style gloves touching what appears to be pages of arabic text

BBC: Finland: National radio to read Koran 'cover to cover' The Koran will be read from cover to cover on Finnish public radio as part of a new series, it's been announced.

The country's public broadcaster, Yle, has divided the reading into 60 half-hour segments, including a discussion between two experts on the context and meaning of each part. Beginning on 7 March, the project is "intended to increase people's knowledge of the Koran and Muslim culture in Finland"...A leader from Finland's Muslim community, Imam Anas Hajjar, will discuss each section with Professor Jaakko Hameen-Anttila, who translated the text into Finnish.

Anas Hajjar who has been at one time a secretary for the FIS, had this to say about the movie he didn’t watch, “but knew all about it.”
" I believe it to be wrong if free speech is used to attack other people and spread hatred. I got the understanding form the film’s promo that it’s spreading hatred. European laws should prevent such activity, because the spreading of hatred is against the law.”


TundraTabloids archive on Jaakko Hämeen-Anttila reveal he suffers from a severe case of Islamophilia.
Posted by Pastorius at 5:00:00 pm

Heh, could have been a very good idea had they called in a real expert on Islam rather than some Muzzie who's going to lie through his teeth.

Gives me an idea though: We could do this (painful) exercise. Go through the Quran and expose what it really says...WHO'S GOT A RADIO STATION?!

Nico, a weekly response to each program, "unveiling" the deception these two will attempt should prove equally entertaining

The imam suggests no infidel can explain Islam. Turn the tables...
No imam, no muslim can better explain the danger posed to non-muslims better than an apostate or victim of Islam. The signature of testimony to such danger is signed in blood throughout history as well as current events.

Anon, the response thing sounds great. If anyone's willing to put in the time to translate a transcript, I will be happy to work on responses.

Sadly, I don't think we have any readers who speak that language.