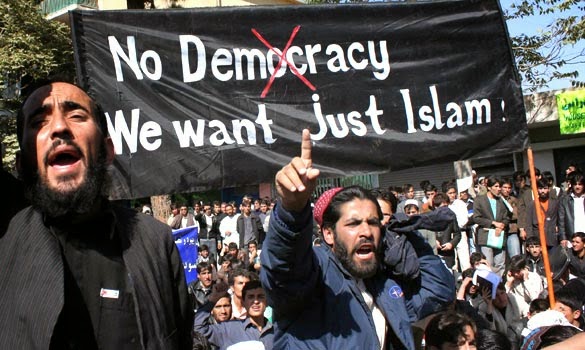 
France, Belgium and now even liberal Denmark regret letting in so many immigrants from Muslim countries. Their swelling Islamic communities have become breeding grounds for terrorists.

So why is the U.S. opening the floodgates to foreign Muslims? The threat Muslim immigrants pose to homeland security was not addressed during the White House's three-day summit on terrorism. Instead, Vice President Joe Biden assured Muslim groups gathered during one session that the "wave" of Muslim immigration is "not going to stop."

Wave? More like a tsunami. Between 2010 and 2013, the Obama administration imported almost 300,000 new immigrants from Muslim nations — more immigrants than the U.S. let in from Central America and Mexico combined over that period.

This is a sea change in immigration flows, and it threatens national security. Many of the recent Muslim immigrants are from terrorist hot spots like Iraq, where the Islamic State operates.

From 2010-2013, Obama ushered in 41,094 Iraqi nationals from there. Now the State Department says it will quadruple the number of refugees brought here from Syria, where IS is headquartered. The U.S. will admit as many as 2,000 Syrian nationals by the end of fiscal year 2015, up from 525 since fiscal 2011.

Yes, the number of displaced people inside war-torn Syria and Iraq, an estimated 3 million refugees, rivals the most in Mideast history. But rolling out the welcome mat for them in the middle of a mushrooming war on Muslim terrorism is dangerously shortsighted.

Top U.S. counterterror officials say terrorists could easily slip into the country from Iraq and Syria, in spite of promised screening procedures for such refugees.

That's no stretch. If just a fraction of the 300,000 new Muslim immigrants already here follow in the footsteps of the Franco-Algerian brothers who recently terrorized Paris, we could be facing chronic terror in our cities.

The main homeland threat from groups like IS comes through our immigration system. If they also use our loose policies as a vehicle for jihad and Islamization, we will face the same crisis as Eurabia.

The British press is reporting that IS has threatened to release a huge wave of migrants from Libya across the Mediterranean disguised as refugees to cause chaos in Europe. Who's to say they aren't setting a similar immigration bomb for America?

Major media are carrying water for this report:

NPR: Finnish Public Broadcasting To Read Entire Quran In New Series
get a load of the photo chosen for NPR: red santa style gloves touching what appears to be pages of arabic text

BBC: Finland: National radio to read Koran 'cover to cover' The Koran will be read from cover to cover on Finnish public radio as part of a new series, it's been announced.

The country's public broadcaster, Yle, has divided the reading into 60 half-hour segments, including a discussion between two experts on the context and meaning of each part. Beginning on 7 March, the project is "intended to increase people's knowledge of the Koran and Muslim culture in Finland"...A leader from Finland's Muslim community, Imam Anas Hajjar, will discuss each section with Professor Jaakko Hameen-Anttila, who translated the text into Finnish.

Anas Hajjar who has been at one time a secretary for the FIS, had this to say about the movie he didn’t watch, “but knew all about it.”
" I believe it to be wrong if free speech is used to attack other people and spread hatred. I got the understanding form the film’s promo that it’s spreading hatred. European laws should prevent such activity, because the spreading of hatred is against the law.”


TundraTabloids archive on Jaakko Hämeen-Anttila reveal he suffers from a severe case of Islamophilia.