Yeah, About Those ‘Muslim Human Chains’ Around Synagogues and Other Staged Photo Ops


PJMedia: Yeah, About Those ‘Muslim Human Chains’ Around Synagogues and Other Staged Photo Ops

People are wetting themselves over on Twitter right now after Muslims formed a human chain around a synagogue in Oslo, Norway, yesterday following the terror attack this week at a synagogue in Copenhagen, Denmark. Here’s some of the reaction, beginning with GOP pollster Frank Luntz:

Now I’m not going to get into the motives of those involved today, but color me skeptical of these types of events for several reasons. First, if you contact the international media to cover your event, forgive me if I question your sincerity.

Your staged “Ring of Peace” photo op is really a “Ring of Propaganda.” Matthew 6:1-4 and all that. Secondly, when you use actual victims (Jews) to try to make yourselves (Muslims) the victims by leading your chants with “No to anti-Semitism,” and then smuggling in your “Islamophobia” narrative, I’m calling bullshit.

As Reuters reported, this is what happened: More than 1000 Muslims formed a human shield around Oslo’s synagogue on Saturday, offering symbolic protection for the city’s Jewish community and condemning an attack on a synagogue in neighboring Denmark last weekend.

Chanting “No to anti-Semitism, no to Islamophobia,” Norway’s Muslims formed what they called a ring of peace a week after Omar Abdel Hamid El-Hussein, a Danish-born son of Palestinian immigrants, killed two people at a synagogue and an event promoting free speech in Copenhagen last weekend.

When you fail to leave your own agenda at home, this isn’t about protecting victims, it’s about you grinding your “Islamophobia” narrative.

Thirdly, these Muslim “human chain” photo ops are never around when you actually need them. To emphasize that last point, let me tell you two stories.

The first begins in July 2013 in Sohag, Egypt. After Egyptian President Mohamed Morsi of the Muslim Brotherhood was deposed following the largest protests in recorded human history, the Muslim Brotherhood staged a “human chain” photo op in Sohag saying they were going to protect the St. George Church as a show of interfaith solidarity, notwithstanding those filthy infidel Coptic Christians backing General (now President) Sisi for removing Morsi.

The MB’s “human chain” event in front of St. George Church also made international news, with this picture being widely circulated as evidence of interfaith cooperation: 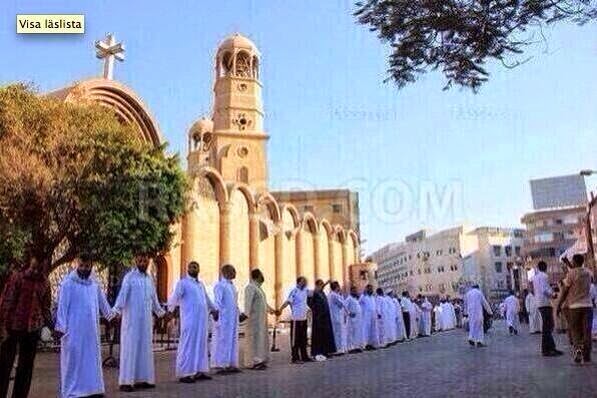 It should be noted that the picture itself is watermarked by the pro-Brotherhood Rassd.com online news portal. Alas, that’s not where the story ends. Several weeks after their “human chain” photo op, the Muslim Brotherhood torched the very same St. George Church in Sohag following the dispersal of the Muslim Brotherhood protests in Rabaa Square in Cairo. Here’s a picture of the attack on the Mar Girgis church tweeted out by ABC News foreign editor Jon Williams:

IsraelMatzav: Oslo synagogue "peace ring" not all it's cracked up to be
Posted by Pastorius at 5:50:00 pm

We SHOULD laud the action, and point out that it is LAUDABLE PRECISELY because it is an EXCEPTION.

If this is a threat and there are 110 Muslims for every Jew on the planet, where are a few at the door at every temple to save THEIR religion.

I am glad this action was taken NO MATTER the impetus, because the public reaction SOONER OR LATER will devolve upon why this was so exceptional.

'Has it ever happened before? Why has it not happened since?'

Attention must be paid so that if this is a distraction committed to PLACATE the genl public as it became unavoidably aware of the TRUTHS, the failure of this to replicate can NEVER be blamed on the failure of the west's media to recognize good, moral and ethically unimpeachable behavior within the Muslim population

I see your point. Good one.