UPDATED AT BOTTOM OF POST --- Is Obama Attempting to Destroy the American Military? 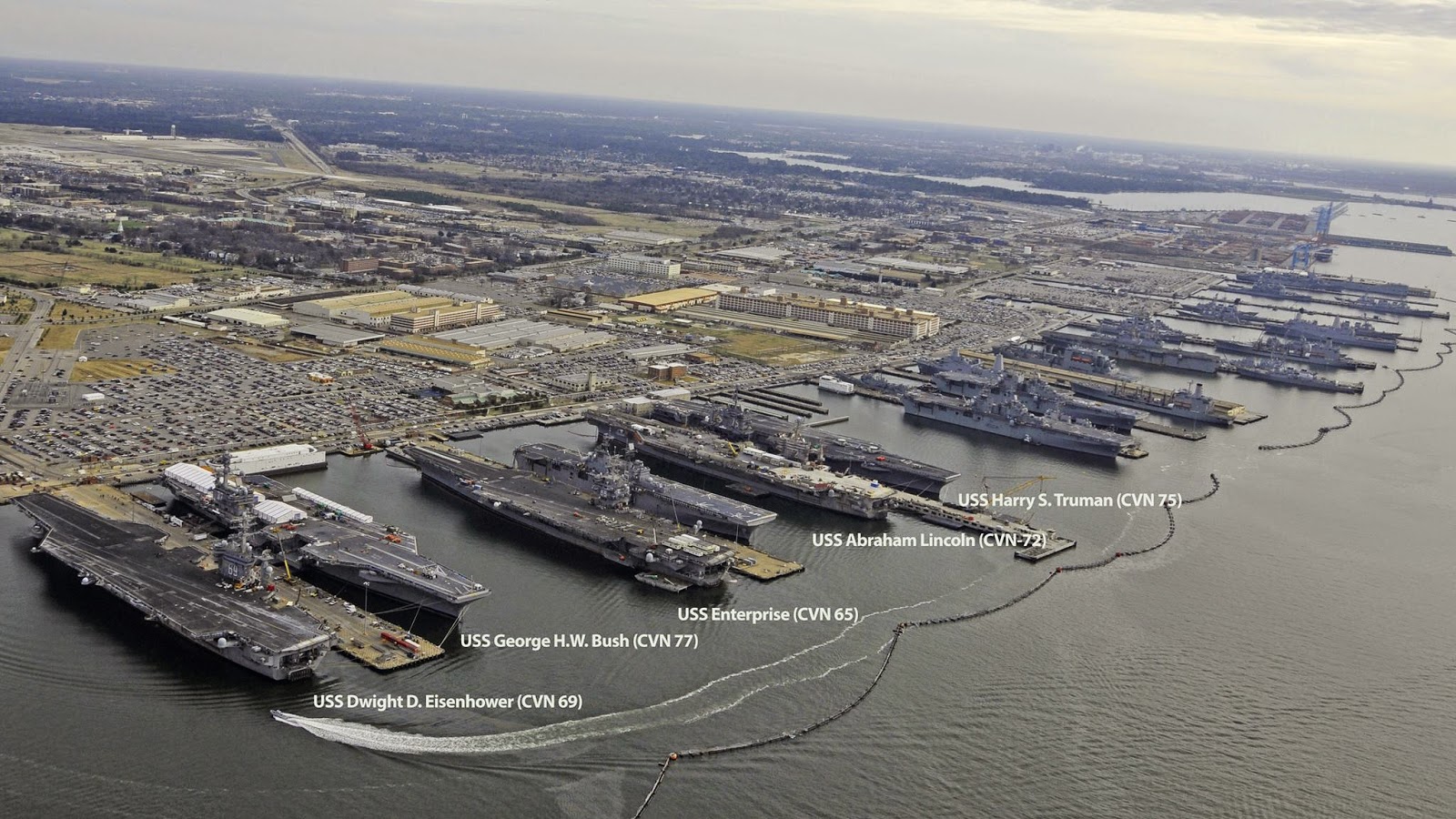 
The picture is of the five first line US nuclear carriers docked together in one place.

This picture was taken the February 2014 in Norfolk , Virginia. Obama ordered
5 nuclear carriers into harbor for “routine” (?) inspections. Heads of the Navy were flabbergasted by the directive but had to comply as it was a direct
order from their Commander-in-Chief.

The carriers were all pulled out from the MIDDLE EAST and the Afghanistan
support role leaving our land forces naked and exposed without the air support
needed to carry out their missions.!

NORFOLK, VA. (February 8, 2014). This is the first time since WWII that five
aircraft carriers were docked together. (These are all nuclear carriers).

are all in port at Naval Station Norfolk , Va. , the world’s largest naval station.
Knowledgeable sources stated that this breached a long standing military
protocol in the Navy meant to avoid a massive enemy strike on major US forces.

This ordering of most of the Navy’s capitol ships into one place is
unprecedented since Pearl Harbor !

END_OF_DOCUMENT_TOKEN_TO_BE_REPLACED (a list of Generals fired under Obama's admin)

This story is filled with distortions:


This photograph of ships lined up at the piers of the Norfolk Naval Base was widely circulated in March 2013 with accompanying claims that it showed five U.S. aircraft carriers simultaneously docked in the same place for the first time since World War II.

Although the photograph is genuine, and five carriers were indeed docked at Norfolk at the same time, most of the claims in the accompanying text are exaggerated or untrue: the ships were not all "first line" carriers, nor were they "pulled out from the Middle East" and "ordered into harbor for routine inspections," and the situation was not the first occurrence of its type since World War II, nor was it a "breach of long-standing military protocol."

I am not happy about this.

Sorry to have given you an inaccurate story.

I believe the list of fired generals at Vlad's site is accurate.

If anyone finds out it is inaccurate, please let me know.
Posted by Pastorius at 12:44:00 pm

Clearly, an image confirming such a 'flabbergasting' move was a visible message being sent by the 'illegitimate-current-occupant-of-the-oval-office'.
At Vlad's sourced facebook link, some related comments of potential interest:

"explains the uptick in Chinese and Russian subs and spy ships spotted recently..."

"... does anyone remember the Navy recruiting ads a few months back where the soundtrack sounded similar to the Oath of Service? They didn't swear allegiance to the Constitution or lawful orders. ..."

Is this true? Could be an urban legend. I can't look it up right now, but maybe somebody else can.

Are any of you aware of this
executive order? Its potential sounds ominous to me ...

AOW, is WHAT an Urban Legend?

From Charles Martel's link:
Ensure that as the government adjusts to this new digital world, we seize the opportunity to procure and manage devices, applications, and data in smart, secure and affordable ways.

To drive this transformation, the strategy is built upon four overarching principles:

An “Information-Centric” approach – Moves us from managing “documents” to managing discrete pieces of open data and content17 which can be tagged, shared, secured, mashed up and presented in the way that is most useful for the consumer of that information.

A “Shared Platform” approach – Helps us work together, both within and across agencies, to reduce costs, streamline development, apply consistent standards, and ensure consistency in how we create and deliver information.

A “Customer-Centric” approach – Influences how we create, manage, and present data through websites, mobile applications, raw data sets, and other modes of delivery, and allows customers to shape, share and consume information, whenever and however they want it.

A platform of “Security and Privacy” – Ensures this innovation happens in a way that ensures the safe and secure delivery and use of digital services to protect information and privacy.

Some of the alleged reasons for firings:

Blaze: Major reason military commanders are fired
The figures show that 255 commanders were fired since 2005, and that 78 of them were felled by sex-related offenses. A breakdown: 32 in the Army, 25 in the Navy, 11 in the Marine Corps and 10 in the Air Force.

Alcohol and drug-related problems cost the jobs of 27 commanders – 11 in the Navy, eight in the Army, five in the Marine Corp(s and three in the Air Force.

Reuters: 10/11/2013 US Major General overseeing nuclear missiles to be fired - official The two-star U.S. general in charge of the Air Force's arsenal of intercontinental missiles will be fired due to "a loss of trust and confidence," a Pentagon official told Reuters on Friday.

FWIW..."SNOPES" on the photo of the five aircraft carriers :
The photograph is genuine. The text accompanying the photo is exaggeration. The photo was taken in mid December 2012.

Pasto,
I was questioning whether or not this fleet was lined up right now.

The list of officers relieved of command under Obama is only partial. As noted above, Snopes confirms the photograph is genuine & was taken in mid December 2012. Now, one of the relieved officers may have been disaplined as a result. I can't say for certain since details are vague...but the timing suggests it might be related to the controversial circumstances/photo:
Norfolk Naval Shipyard CO fired Capt. Greg Thomas, who has commanded the Portsmouth, Va., shipyard since September 2010, was assigned to temporary duty at Naval Sea Systems Command in Washington, D.C., pending the outcome of the investigation, being conducted by the Naval Inspector General, according to NAVSEA spokeswoman Pat Dolan....Rear Adm. http://www.navy.mil/navydata/bios/navybio.asp?bioID=355">Joseph Campbell, a former shipyard commander who had been working as head of the NAVSEA directorate for logistics, maintenance and industrial operations, reported Monday morning as the acting shipyard commander until the investigation is complete, Dolan said.

The first dozen minutes is an intro w/background info on contributors to report.
At around the 27 minute mark, discussion of availability/placement of military assets mentions the regions which our assets have no presence. He mentions Russia's increased efforts in the Arctic to secure shipping lanes. ..triggering a historic reminder of Europe's reasons for seeking secure commerce routes across little explored western seas - away from Barbary treachery. Given his remarks @ Africa security concerns...hmmmm.

Re: 2/25. 5:02 link...keep in mind, the depressing - if not alarming report discussed in that video is "DEscriptive" of the current situation of our diminished military capability. These same folks are also working on a PROscriptive report coined...RAMP- Renewing America's Military Project