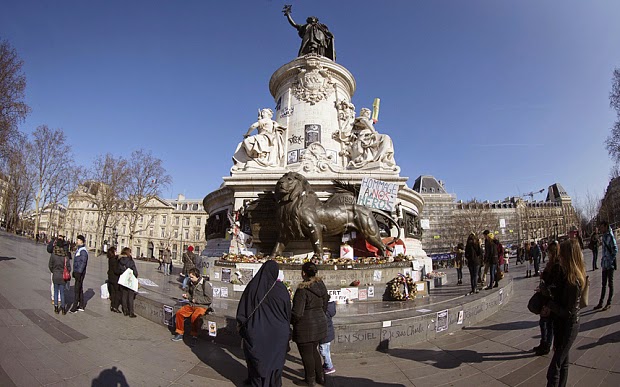 
A shrine in memory of the 17 people killed in attacks by three Islamist gunmen in Paris last month has been vandalised, it emerged on Sunday.

It is the fourth time the makeshift memorial, consisting of flowers, notes and photographs, has been damaged in just two weeks, said Sabrina Deliry, head of a group called “17 Never Again”, which created the shrine in Place de la République in central Paris.

“We’re sickened and disgusted,” Ms Deliry said after finding the flowers and messages of peace kicked, torn and scattered.

“It’s not the wind or the rain that did it as even objects and messages that were covered have been vandalised,” she said.

“When this happened before, we repaired the damage without saying anything, but this is too much.”

Rémy Vialeret, another member of the group, which cleans the shrine regularly, lights candles there and covers handwritten messages in plastic, said previous attacks had caused less damage.

“This time, they wrecked everything,” Mr Vialeret said, explaining that wreaths, messages and drawings had been ripped up.

He said the group had filed a police complaint.