I'd heard that comics artist VanSciver was a conservative. But last month, he tweeted a few posts involving the Charlie Hebdo massacre that make me uncertain that's really his stance. First, here's the positive posts and a screencap of a retweet:


My heart is with France and the brave cartoonists over there who stood up for art and self-expression, and against fascism and terror.
— Ethan Van Sciver (@EthanVanSciver) January 7, 2015 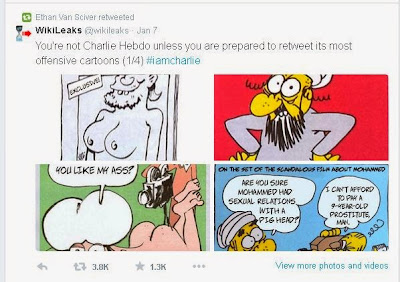 So far, so good. He's expressing solidarity. But, here's where it becomes less certain:


#KillAllMuslims is trending now. It breaks my heart that we still react this way to the crimes of a few. We need to grow up.
— Ethan Van Sciver (@EthanVanSciver) January 7, 2015


The victims of today's terrorist attack were martyrs for liberty. The idea of a #KillAllMuslims hashtag dishonors their sacrifice and art.
— Ethan Van Sciver (@EthanVanSciver) January 7, 2015


First off, it's not good there's a hashtag like that turning up. In fact, it's very bad. But this honestly reeks of liberal mentality to say it was done in the name of a few, or to ignore the Koran's influence, and I don't like his inference that the writers at Charlie Hebdo's office who were murdered were "martyrs". This tragedy should not have happened, and to suggest the contributors are martyrs by being murdered is offensive to their memory. And that's not all Van Sciver's said:


@dschumann0 Innocent Muslims r killed overseas by Americans all the time. Casualties of the war brought about by Extremists. Is that fair?
— Ethan Van Sciver (@EthanVanSciver) January 7, 2015


Paris' terrorism attack must be the reason nobody is talking about #NAACPBombing on TV. Seems racist though.
— Ethan Van Sciver (@EthanVanSciver) January 7, 2015 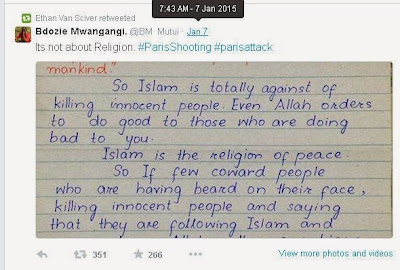 He goes on to say that "innocent" Muslims are killed by Americans abroad all the time, and that's another serious detractor from his credibility as a would-be conservative. It's offensive to US army officials fighting to defeat jihadists overseas, and his retweet of some taqqiya claiming it's not about religion doesn't help matters either. What about all the Muslims killed by their own fellow Muslims? Note to Van Sciver: research the Koran before buying into taqqiya at face value.

As for the bombing at the NAACP, it turns out the culprit was targeting an accountant's office nearby in revenge for the businessman's failure to address his financial problems, and not the NAACP's office at all. But even if it was what they initially suspected, has it ever occurred to Van Sciver that what happened in Paris also stemmed at least partly from racism, along with the hatred for infidels who dare mock their "prophet"? It sounds like he was "reverting to type" pretty fast there.

This info makes it a lot less certain Van Sciver's really a conservative. If anything, he might be an alleged libertarian like Ron Paul. Thanks to this dismaying info, Van Sciver is adding himself to a growing list of artists and writers who, if their work is worth something, will have to be taken with a grain of salt.
Posted by Avi Green at 6:34:00 pm

He can be a conservative and a Jew hater, or like most "liberals" is an economic conservative, and a social liberal ...

You really don't have much credibility if you don't read and re-read before commenting on something, love.
Ethan did not call the bombers martyrs, as you claim. Look at the tweet in question again, and say the words out loud and slowly, to give your brain time to click into 'comprehending simple statements' mode.

I don't think the author of this blog reads above the 4th grade level.