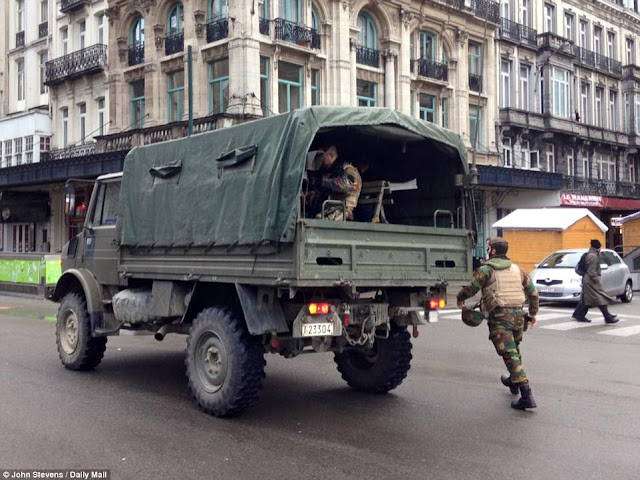 Brussels has been put into security lockdown after Belgian intelligence received ‘precise information’ of a planned Paris-style ISIS attack in the capital.
Belgium’s prime minister Charles Michel confirmed that the decision to raise the terror alert level in Brussels was taken ‘based on quite precise information about the risk of an attack like the one that happened in Paris.’
Service has been halted on the Brussels subway system and heavily armed police and soldiers are patrolling the Belgian capital amid a high security alert.
The country’s national security center has raised the terror threat level to Level four after fears of a ‘serious and imminent’ terror threat involving ‘weapons and explosives’.

Just one of the minor inconveniences we live with, for the pleasure of spending our lives with all the lovely Moderate Muslims who come to share their talents with us here in the Western World.


ISIS’s chilling new tactic: Terror group tells British-based fanatics to stay hidden in the UK and wait until they get a signal to attack.

British jihadis are being ordered by Islamic State to forget travelling to Syria, remain in the UK and wait for a signal to attack.
Days before the Paris massacre, UK-based jihadis were being told of plans for imminent attacks in both France and Britain, messages seen by the Mail Investigations Unit suggest.
They are being advised not to risk travelling to Syria but to stay hidden in Britain until ISIS commanders give ‘the signal’ to strike.

A new video threatening more attacks on France has been posted on sites that support the Islamic State (IS) armed group. French police have freed seven people detained in Wednesday’s raid in which alleged Paris attacks ringleader Abdelhamid Abaaoud and two other people were killed.

The six-minute video, spotted by the SITE jihadi-watch organisation, contains footage and still photographs of the 13 November Paris attacks and threatens “things that will be worse than 11 September”, a reference to the 2001 attacks on the US in which some 3,000 people died.

Russia kills 10 militants who had sworn allegiance to IS: agencies

DON'T WORRY, THOUGH. THIS ALL SHOULD WORK OUT REALLY WELL.
Posted by Pastorius at 2:21:00 pm

Back between 2004 and 2007 there were reports of suspicious characters (ME characteristics) scouting hospitals (links may no longer be active). ..particularly veterans hospitals.... http://news.yahoo.com/news?tmpl=story&u=/ap/20040827/ap_on_go_ca_st_pe/terrorism_va_hospitals_3

as well as concern about similar characters attempting to gain access to hospitals under false pretenses:

And several reports of breaches of security at hosptials...

or the reports of suspicious activity involving ambulances

Here is another link to an article [Last modified October 22, 2004, 01:10:16] regarding surplus emergency vehicles being sought by M.E. individuals in FL:

How do you remember all that?

You have a very good memory, don't you?

Fortunately, key words, like 'ambulance' trigger some vague recollections of long past incidents which I can search my computer files.

That's why I post these links online, so that the information is resurrected despite efforts of those who would prefer such uncomfortable details be long forgotten.