Barack Obama's Statement: "Senator Obama Has Never Been A Muslim, Was Not Raised A Muslim" 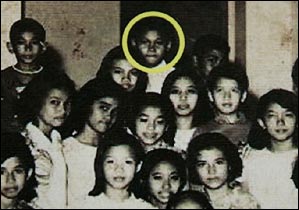 I like that Barack Obama has directed his people to clearly enunciate a denial on this issue. And, someone, I don't know whether it was someone within his campaign or not but I would suspect so, has released the photograph you see here which is said to be of him at school in Indonesia. The children he is standing with certainly do not look to be dressed in Muslim garb.

By issuing an unequivocal statement Barack Obama has never been a Muslim his campaign is drawing a line in the sand, and this is a line they draw because they know that a large percentage of the American people are cognizant of what it means to have been educated in an Islamic madrassa.

Let us be clear, though, as far as I can tell, Obama has not denied that the school he attended was a Muslim school. Instead, he has simply said he was never a Muslim.

From the Telegraph (thanks to Religion of Pieces):


Mr Obama's campaign team at first decided not to respond to the claim, published in the conservative Insight magazine, that he had been enrolled by his father for "at least four years" in a madrassa, a radical Islamist school, that was "espousing Wahhabism".

But when the article, which cited unnamed sources close to the campaign of Mr Obama's rival Senator Hillary Clinton, made the madrassa question a staple of every television interview, he decided to strike back.

"To be clear, Senator Obama has never been a Muslim, was not raised a Muslim, and is a committed Christian who attends the United Church of Christ in Chicago," the statement issued on his behalf said. It denounced the charges as "precisely the kind of politics the American people have grown tired of".

But Steve Doocy, a Fox News host, said on air: "Why didn't anybody ever mention that that man right there was raised – spent the first decade of his life, raised by his Muslim father – as a Muslim and was educated in a madrassa?"

The Obama statement pointed out that he was not raised by his father, who was "an atheist Obama met once in his life".

According to a Time magazine poll released yesterday, Mr Obabama trails Mrs Clinton by 21 to 40 per cent nationally. But Mr Obama, 45, who has rocketed to celebrity status despite his inexperience, polls much more strongly in the key early primary and caucus states of New Hampshire and Iowa.

His vigorous written denial was a risky move because it guaranteed further press coverage of the story and might give it an unwarranted dignity.


One of the most entertaining opportunities that will emerge in 2007 will be using Barack Obama to fight Islamofascism. His father deserted the family when Barack Jr. was two and returned to Kenya. His mother then married another Moslem studying at UH, Lolo Soetoro from Indonesia.

He moved with his mother and stepfather to Jakarta when he was six, where he attended a Moslem medressa (religious school). That makes him a Moslem. There is no mention of this in the chapter of his book, The Audacity of Hope, where he discusses his religion, My Spiritual Journey (reprinted in Time Magazine). Obama claims he is a Christian, that he and his wife Michelle are members of the United Church of Christ.

The opportunity in this is not accusing him of being a “closet Moslem.” It requires taking him at his word that he has become a Christian — for that means he is an apostate. There is no dispute among either ancient or modern Moslem scholars that under Islamic law, a murtadd, “one who turns his back on Islam,” an apostate, must be put to death. Irtidad, apostasy, is committing treason against God, and traitors deserve to be killed.

Should Obama deny he ever was a Moslem, it will compound the problem in the eyes of Moslems. He was born of a Moslem father, raised by a Moslem stepfather, and received his first education at a Moslem school. That he subsequently went to a Catholic school in Jakarta before living with his mother’s parents back in Honolulu makes no difference. In the eyes of Moslems, he originally was a Moslem. How can he not be in those eyes, with a Koranic first name and his middle name that of the grandson of Mohammed? For him to become a Christian means he is, for them, a murtadd, an apostate.

Which provides the perfect opportunity for an enterprising journalist to ask him at a press conference if he is:

1. Afraid of Moslem assassination attempts as punishment for being in Islamic eyes an apostate?

2. Willing to publicly call upon all Moslems around the world to renounce such punishment and declare instead that Moslems are fully free to convert to another religion?

The odds are high that he will answer no to the first and yes to the second. As an oily politician, he will try to squirm out of a clear definitive yes with no wiggle room. But it should not be difficult for a smart journalist to get him to agree without reservation that Article 18 of the Universal Declaration of Human Rights, which states...

Everyone has the right to freedom of thought, conscience, and religion. This right includes freedom to change his religion or belief...
...applies to Muslims

Once Obama condemns the Moslem tradition of death for apostasy, then he can be asked:
The Koran famously quotes Allah as saying in chapter (sura) 2, verse 256 that there should be ‘no compulsion in religion.' Yet numerous sayings of Mohammed known as hadith which form the basis of Islamic Sharia law quote Mohammed as saying ‘If a Moslem discards his religion, kill him.' So are you telling Moslems that Allah was right but Mohammed was misquoted, and their Sharia law tradition on apostasy is wrong?

You can see how much fun there is to be had with this. Again, the key is taking Obama at his word that he is a Christian and not secretly a Moslem. No accusations necessary. The point is that Moslems view him as first a Moslem, not that he does. If done right with honest, straightforward, and persistent questioning Obama can serve as a quite useful anti-islamofascist tool.

Moslems will be infuriated with him for embarrassing them, Americans will tell themselves never to vote for someone with Hussein in their name to be their president — and it just might get a number of influential Moslems to abandon an important part of Islamic law. This is going to happen to Obama this year. And not only that. For he’ll then be asked if he will support the efforts of Christian missionaries in Islamic countries to peacefully convert Moslems to Christianity.

I loved how you thought this through. It's a long post and I could find nothing to quibble about!!!

Well thanks, but much of it was written by Jack Wheeler.

Someone has to begin asking this question of Mr. Obama in public and it has to be repeated until we get a factual and coherent answer. That will probably require numerous attempts because I guarantee you he will weasel his way out of answering the question as posed every which way he can. Don't give up. It's too important to the public's understanding of what Islam is really about.

Btw, if anyone runs into Hillary on the stump, would you do me a favor and tell her she is a perfect example of a "Presidential Model"? Those exact words. I just want to find out what she does/says. If anybody does it and can report a reaction, I'll explain then. You will sooooooo love this...

Ok, if I run into Hilary, I'll ask her that.

An apostate for President, now wouldn't that be slap in the monkees' faces...would they call for his execution?

Maybe that would wake the dhimmidiots up...

absurd thought -
God of the Universe wants
an apostate in White House
.

You've read my mind and answered my questions!

Since you have spun your entire report based on an unsubstantiated claim, you should at least acknowledge the excellent work of CNN in sending a reporter to Jakarta to ACTUALLY INVESTIGATE THE TRUTH OF THE RUMOR about this school. CNN found the school not to be a madrassa -- far from it.

I don't believe you actually read the words that I wrote.

Just for the record, the arabic word madrassa is not used to describe a school espousing Wahabbism -- but simply a school. Very few madrassas in the Muslim world teach Wahhabism. And I mean *very few*...

And so what if he was a Muslim. Does that make him unfit to lead a free society? Or does everyone here think he's a sleeper agent for the Revolutionary Guard? (Which is Shia anyway -- not that anyone would care to know the difference in this country.)

But if I where him, I would be scared to admit it, too. Pretty obvious why.

That said, I'm not voting for him anyway, so there it is.

If Obama were a Muslim, it would matter to many people in the United States. It doesn't matter so much to me that Obama is Muslim or not. What matters to me is that I don't want the American populace to believe that Islam is a decent religion, because it is not. There may be decent Muslims (and there are) but Islam is not a decent religion. The evidence for this is abundant.

There is no solid Islamic democracy anywhere in the world. Turkey is held up as an example of a model Islamic country, but Turkey has many problems. I certainly would not want the U.S. to be like Turkey.

sorry, but how shallow ur thought about islam? not all people with Islam religion are bad... everybody in the world has a right to pray to God in every way...even moslem people too..
u don't have the right for judging people that they are not decent because of Islam... u r not GOD anyway..
i know a lot of terrorism made by people that known as Islamic people..but the real Islam is not like that,their just few people with different view about Islam..
probably u should learn more about Islam before you judge it...