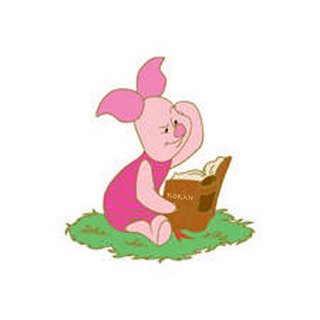 Each year on the Chinese calendar is marked by a different animal. As I recall, we have had the year of the Dragon, the year of the Tiger, etc. I don't pay much attention to tell you the truth.

I did know that this coming year was to be the Year of the Pig. I thought that was kind of funny.

Well alas, it is not to be the Year of the Pig after all:


SHANGHAI -- Next month, China will ring in the Year of the Pig. NestlÃ© SA planned to celebrate with TV ads featuring a smiling cartoon pig. "Happy new pig year," the ads said.

This week, China Central Television, the national state-run TV network, banned Nestle's ad -- and all images and spoken references to the animal in commercials, including those tied to the Lunar New Year, China's biggest holiday.

The intent: to avoid offending Muslims, who consider pigs unclean. "China is a multiethnic country," the network's ad department said in a notice sent to ad agencies late Tuesday.

This has to be a joke I told myself. I read the link and still can't believe it. I never knew China is a multi-ethnic country.
Year of the pig, oh well. But what about dog and monkey too? Darn that little piglet is soooo cute!

I could believe this coming from Britain, France, even the USA...

But China?! Since when did that totalitarian dictatorship care about offending its citizens? The only reason I can conceive for this move is cozying up to Iran.

STEYN QUOTE- "When every act that a culture makes communicates weakness and loss of self-belief, eventually you'll be taken at your word. In the long term, these trivial concessions are more significant victories than blowing up infidels on the Tube or in Bali beach restaurants. An act of murder demands at least the pretence of moral seriousness, even from the dopiest appeasers. But small acts of cultural vandalism corrode the fabric of freedom all but unseen..."

From "Free Pigia: The Campaign Continues". [For Pooh fans- there is also an excellent Piglet graphic there-- from the original Milne Winnie the Pooh illustrations.]

OK, someone's now officially in the business of kissing the Gulf asses.

I haven't trusted the Chinese for a while now, and this was the last nail in the coffin.

If the West had had at least ONE competent, non-suicidal leader, bringing China in on the right side in this World War would be very high on his/her agenda now. Somehow, I don't see neither Bush, Blair, Merkel nor Chirac losing any sleep over this dramatic caliphate victory - anyone else?

Anonymous,
You call it a dramatic caliphate victory. I don't think any of our Western leaders would see it in those terms. I think they would think of what you say as hyperbole.

I agree with you, however. It's not the caliphate is now established, but it is true that this is how they go about slowly instituting Sharia. And no, our leaders don't get that.

Paranoid question of the day: are there Jihadist moles inside Google who are staking out this blog and compiling dossiers for, er, peaceful inner struggle in the future?

Are you one of them?