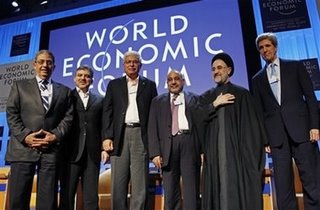 
DAVOS, Switzerland - Massachusetts Sen. John Kerry slammed the foreign policy of the Bush administration on Saturday, saying it has caused the United States to become "a sort of international pariah."

Kerry said the Bush administration has failed to adequately address a number of foreign policy issues.

"When we walk away from global warming, Kyoto, when we are irresponsibly slow in moving toward AIDS in Africa, when we don't advance and live up to our own rhetoric and standards, we set a terrible message of duplicity and hypocrisy," Kerry said.

"So we have a crisis of confidence in the Middle East — in the world, really. I've never seen our country as isolated, as much as a sort of international pariah for a number of reasons as it is today."

Speaking of a message of duplicity and hypocrisy, for the record, Kerry voted for a resolution in 1997 that stated that the US should not be a signatory to the Kyoto protocol because it "did not include binding targets and timetables for developing as well as industrialized nations" and could "result in serious harm to the economy of the United States." Simply put, Kerry voted against Kyoto.

And while there is certainly a lot of things to criticize President Bush about, his commitment to fighting the AIDS crisis in Africa is not one of them. Under the president's Emergency Plan for AIDS Relief (PEPFAR), $15 billion has been committed to a 5 year plan which has led to approximately 800,000 Africans receiving drugs to fight the disease and to help prevent mother to child transmission. Some estimate that PEPFAR has saved hundreds of thousands of lives.

What a terrible message that sends, huh John?

Update: Charles Johnson points out that while Kerry was calling the US "an international pariah" he was also glad-handing such upstanding members of the international community as former Iranian President Mohammad Khatami.

... this is John F. Kerry, doing what he does—giving aid and comfort to the enemies of America during wartime.

Some background on Khatami: he has endorsed Ahmadinejad's call for the annihilation of Israel, he has described Hezbollah as a “shining sun that illuminates and warms the hearts of all Muslims and supporters of freedom in the world," he oversaw one of the largest crackdowns on reformers in Iran's history which led to the torture and murder of those that spoke out in favor of freedom and democracy, and he refused to hand over Iranian intelligence officials responsible for the Khobar Towers attack that killed 19 US servicemen.
Posted by Pastorius at 6:38:00 pm