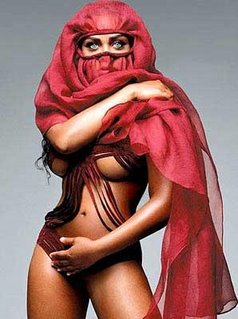 Tonight, Fu2rman and I interviewed Craig Baker, the Texas man who responded to the new Mosque next door by staging a "Great American Pig Race and Pork Barbecue" every Friday night during prayer services.

We also talked with Imam Ali Allah Akbar Bibi, who proclaimed death to the Infidels and Jews, condemned Lesbians, and made a general ass of himself.

And finally, we spoke with Horst Scheinhaxe, the leader of the Council of American-Nazi Relations. (Check out that website. It is something else.)

Horst talked about the plague of Naziphobia which is sweeping the nation. Apparently, some evil right-winger threw a copy of Mein Kampf in the toilet at New York University.

Man, I wish CAIR would find the CANR blog.

Isn't that a classic?

Absolute classic ! the mans a Hero !

Thats they way to fight Islam ! with pork products

Dude, they surf in wet suits at our town beach when it's in the 30s all the time...

Oh, you mean the AIR temperature!

RRA,
I acually surfed in a half wetsuit when it was 33 degrees air temp. But, the water was probably in the fifties or low-sixties. I could never go in water lower than that. My balls would fall off.

Since we're talking about pork as a means of fighting Islam, then our next infidel hunk of the week / [the real] freedom fighter should be him.

Maybe it should be Craig Baker.

They both should be.

I just got my 'American Pig Races' t-shirt this week and I love it.

I'm the first on my block. Who am I kiddding? I'm the ONLY one in my moonbatty neighborhood in NY to have one.

Good story. I noticed you didn't provide a link to Craig's website and when I entered his www address I got a request to register- no initial home page or anything. I tried entering a NEW name/password but no go. What gives?

I don't know, and you're right, I screwed up.

I will probably be talking to him soon, so at that point I'll get a real link from him.

Is the following link what you have in mind?
http://www.americanpigrace.com/

Anonymous,
I remember that. That was quite an idea.

Only thing is I think it would be against the law to spread pig's blood around as it is a hazadous waste material I believe.

It doesn't have to be real pig's blood. Just make some red liquid (stir in some pieces of pork, if so desired) and call it pig's blood. The psychological effect of seeing that being spread around would have been the same.

Good point, and I agree.

Here is the AP back on December 31 telling us that Baker had backtracked and acknowledged that he had been mistaken when he thought that the Muslims wanted him to leave his land:

Baker agreed to move his cattle but thought the Muslims also wanted him off the land his family has lived on for more than 100 years.

Earlier this month, Baker conceded that the Muslims probably aren't after his land, but he said he had to go through with the pig races because "I would be like a total idiot if I didn't. I'd be the laughingstock now because I've gone too far."

All the same, Baker plans to continue the weekly pig races until interest dwindles.

The association never meant to imply it wanted Baker to move, Allam said.

"If we somehow communicated that to him, then we apologize," he said.

That is from Dec. 31, 2006. When Baker spoke to Pastorius on Jan. 16, he explained in no uncertain terms that the Mosque folks did in fact suggest that he should leave.

Baker also sheds some light on how the AP got the story they wanted:

Baker told Pastorius, "The AP...ha[s] a young Muslim girl that...filed a story on me, and she had asked me straight up was there any chance that I misunderstood that they were only wanting...me to move my cows and not actually wanting me to move off of my place and I told her 'no, there was no chance whatsoever,' and I told her that about four or five times, and...she asked it four or five different ways, and then a couple days later she called me back and she said, 'is there one half of one percent chance that...that was what they meant or said,' and I said, 'oh, ok, sure, there's a small chance of anything...happening,' and so that's how she led off her story, was 'Rancher Craig Baker misunderstood that they were wanting him to remove his cattle and not move off of his property.' So it made me look like a total idiot."

Listen to the January 16 IBA show at about 35 minutes in to hear this segment of the interview.

Extra, extra, read all about it, AP's credibility still in the toilet!