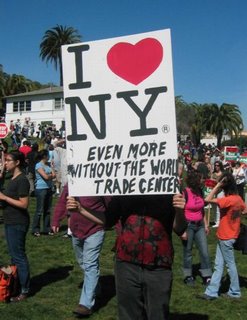 Patriotic terrorists love America with so much intensity that it appears to the untrained eye that they hate it. From Greg Gutfeld at the Huffington Post:


Whenever I visit this lovely blog (referring to the Huffington Post), I usually run into someone - a "leftist," if you will - who finds pleasure in things that make our country or the President look bad. I suppose I could say these angry types are no better than cheerleaders for terrorism. After all, both entities - the left and terrorists - seem to share the same desire: to put the US, humiliatingly, in its place.

But I would be wrong to say such things. Very wrong. Of course, "dissent is patriotic," and the left is only critical of America because it simply loves our country much more than I do.

That's why calling them terrorists would be intolerant and pretty shameful.

But what about "patriotic terrorists?"

What is a patriotic terrorist?

It is an American who claims to love his or her country while enjoying the enemy's success against said country. It is a person who gets deeply offended if you question their patriotism, while also appearing to share the same ideals of the more spirited folk who like to blow up innocent people.

Patriotic terrorists love America with so much intensity that it appears to the untrained eye that they hate it. But it's actually the most powerful form of "tough love" known to man, woman and Rosie O'Donnell. Patriotic terrorists love America so much that they realize it needs an intervention - and real terror is the only way to enable that intervention. In fact, to keep a mammoth, arrogant superpower like America in check, terrorism is the only thing we've got.

Noam Chomsky knew this from the start, making him a patriotic terrorist of the highest order.
This is why he gets the chicks.

Same problem in Britanistan. We have moonbats with severe psychological problems resulting in a personal death-wish who project their psychosis onto wider society with a deathwish for all normal citizens.

The solution to the problem is to put them out of their individual anguish, torment and misery before they can harm anyone else.

What an excellent article from such an unlikely source! I suppose Greg Gutfeld will be banned from The Huffington Post tomorrow.

Self-hating Buddhists (well maybe no such thing, the self is unfindable and hatred is a poison)

May I suggest that all self-haters should be given every opportunity and encouragement to resolve their psychological problems.

Demosthenes,
Actually, I think Arianna will keep him on. He brings in a lot of traffic. Gutfeld used to be the editor of Maxim Magazine. He is a very media savvy guy, and he is regularly a guest on various TV shows.

He's young, hip, and basically everything the HuffPo needs.

Lebanese Muslim man in Montreal stabs his wife and their baby daughter, and refuses to grant his wife a Sharia divorce:
http://ca.news.yahoo.com/s/capress/070125/national/que_shariah_law

This poor guy is being savaged in the comments of the Huffington Post. The place seems like an asylum; chock-full of those same BDS-tainted people he's talking about.