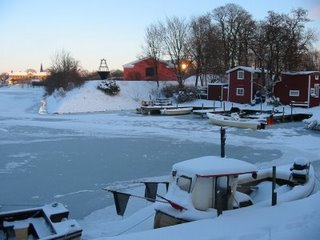 Has Sweden actually allowed its third largest city to fall to Islam? Ronald Barbour of The Freedom Fighter's Journal says it is so:


Thirty years ago this February in 1977, I went to Sweden for a winter vacation. I was stationed with the U.S. Army in Berlin at the time, so armed with a very inexpensive "EuroRail Pass,"I hopped the trains to Sweden, after first spending a wonderful four days in beautiful winter Copenhagen, Denmark.

The next stop on my journey was Malmo, Sweden. I toured the city, which then was 90% native Swede (In fact, I don't even recall seeing any Middle Eastern people there in 1977) and boasted many nice discos and dance clubs where the wine, women and song flowed to beat of Sweden's most famous songsters, ABBA. I well remember walking in the clear northern moonlight of February with a group of English speaking Swedes in downtown Malmo to the docks and a view of the cold Baltic and distant lights of Denmark, only about 20 miles away.

So it is with a shock that I read today Malmo is one of the dangerous cities in Europe where Muslim rape gangs and thugs would make such an outing as mine foolhardy in the extreme, as Malmo has become a combat zone where the Swedish police are forced to travel in convoy for self protection.

MALMO THIRTY YEARS AFTER MY VISIT:

Sweden is one of the worst hit countries in Europe of Muslim immigration and Political Correctness. Now, the police themselves have publicly admitted that they no longer control one of Sweden's major cities. I have made some exclusive translations from Swedish media.
They show the future of Eurabia unless Europeans wake up.


Go read the whole thing at The Freedom Fighter's Journal.
Posted by Pastorius at 1:27:00 pm

I recall first reading about Malmo in essays by Fjordman. Late 2004, a local mattress company offered a contest where the winner would win an all expense paid trip to Malmo, Sweden, site of the mfg. I recall thinking 'who', rather, what rational westernized American would want to win that contest?

Now I read that this. Sigh.