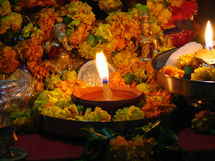 The following letter appeared in the Washington Post on Saturday, January 28, 2007:

In recent months, The Post has covered various religious, cultural and ethnic events in the Washington area and around the world. There have been local and international stories about Muslim festivals.

But The Post doesn't seem to be covering the festivals of other religions. I saw not a word in November about Diwali, the Festival of Lights, a sign of celebration and hope for mankind. It is one of the biggest Indian festivals and is significant in Hinduism, Sikhism and Jainism. I come from India, a secular democracy, where several major Hindu, Muslim, Sikh and Christian religious festivals are national holidays and are extensively covered by the media.

Now millions of Hindus are bathing in the holy river Ganges in India on the occasion of Ardh Kumbh Mela, celebrated every 12 years; more than 70 million are expected by the end of the festival. Why has there not been a single report in The Post?

I confess my own ignorance about Diwali. This article in Wikipedia provides details about the festival which apparently the Washington Post apparently ignored in the newspaper's zeal to "educate" readers about Islam.
Posted by Always On Watch at 10:43:00 pm

The gentler more spiritual 'Asian' religions - Buddhism, Hinduism and Jainism, are being neglected by the media and educational system in the drive to placate the virulantly attention-seeking 'Dawa In Yer Face' Muslims.

Despite centuries of slaughter, there are still nearly as many Hindus/Buddhists/Jains as Mohammedans, but who gets all the publicity?

ROP,
The WaPo prides itself on its multiculturalism, but they are, in fact, dhimmis.