Joke about Islam? You must be beaten or killed 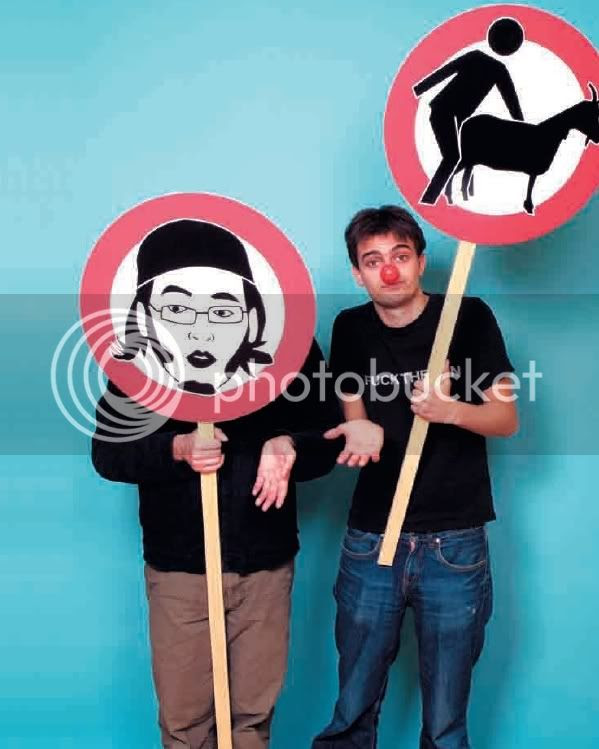 Meet Ewout Jansen, law student in Amsterdam. Ewout is a funny guy. In fact he's the Dutch version of a stand up comedian (known as a 'cabaretier'). Ewout is also a brave guy, fearless in his choice of targets for his jokes. In fact, he makes more then one joke about islam (note the forbidden sign with a subtle goatf*cker motif).

And that has gotten Ewout in a spot of bother. Although the islam jokes are only a small segment of his routine, it often earns him very negative reactions, from abusive language to being stormed on stage. In civilized circles that is not deemed very tolerant. In civilized circles one politely laughs at the jokes of a cabaretier no matter how tasteless. That is why the Amsterdam university paper Folia contacted the board of the Assoena mosque to get their reaction on the uncouth behavior of members of their flock.

The answer was much, much more forthright than any of the good people at Folia had expected. A spokesman of the mosque stated that 'according to islam' Ewout may be beaten or killed (NL, MP3).

You may finish him off

This uncharacteristic frankness on the part of the Assoena mosque was ofcourse corrected in a follow-up teadrinking session with Amsterdam alderman of integration Achmed Aboutaleb, where the mosque board suggested the 'spokesman' was just some fellow off the street picked up (or is it: on) by Folia for a juicy quote. Naturally, the board distance themselves 100% from the unfortunate statements (NL) by this 'visitor' and lament the fact that the Assoena mosque has been portrayed in a bad light.

But Folia is calling 'Bullshit!' (NL). Eric van den Berg, the author of the Folia piece:

They make it seem like I used one or another radical visitor as interpreter. In reality I properly contacted the mosque with the request for an interview. I was referred to the spokesman slash interpreter, a mr. Kabli (phonetically spelled). It was with him that I made the appointment for the interview, which would also be attended by the imam and members of the board. Safe for the imam all the board members had a command of the Dutch language more the enought to hear what was said, exactly. They make it out like it was the cleaner that did the interpreting, but in reality it was *the* contact person between the mosque and the outside world.

In the mean time Ewout is not too impressed. In an interview with Campus.tv (NL), in which he discusses some of his experiences with negative reactions to his jokes about islam he states:

I wouldn like some time receiving a blow for the freedom of speech. I wouldn't mind much.

[INSTANT UPDATE] The PVV, Geert Wilders party, will be asking questions in parliament (NL) about this affair. Specifically they will ask the ministers of Justice, Integration and the Interior to close the mosque, desolve the board and expel all those involved in this 'fatwa', even if denaturalisation is needed.

None of this will happen, ofcourse. But it is a valiant attempt nonetheless. And maybe it'll wake a few more people up to the reality of that vipers nest we've allowed in.
Posted by Kleinverzet at 9:21:00 pm

Good! I see that Ewout Jansen has picked up Theo Van Gogh's cudgel and continued with the goat-fucker theme. We all know that the death cultists have the psychological weakness that they are super precious about their alleged religion. Ewout should keep at it and be absolutely merciless in mocking Islam. Like Ali Sina said (http://ibloga.blogspot.com/2006/02/some-very-enlightening-thoughts-from.html), keep pressing the sore spot!

"The PVV, Geert Wilders party, will be asking questions in parliament (NL) about this affair. Specifically they will ask the ministers of Justice, Integration and the Interior to close the mosque, desolve the board and expel all those involved in this 'fatwa', even if denaturalisation is needed."

Hey - that's something else! Not the standard pussyfooting around "Muslim sensibilities" one is oh so used to. A big cheers to the PVV!

Where were the terrorist Jews threatening the French entertainer Dieudonné M'Bala M'Bala?