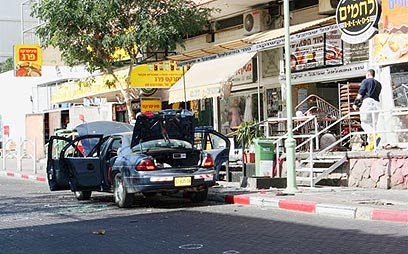 Thanks to Ehud Olmert's negligence and easing of security restrictions, now suicide bombings have returned, and this one reaching as far as Eilat:

A terrorist bomb rocked a shopping area in the Izidor neighborhood of Eilat Monday morning killing at least three.

Officials from the Eilat Police Department confirmed that a suicide bomber infiltrated the area and detonated explosives nearby a local bakery.

Residents of the neighborhood reported a violent blast that shook the windows of nearby buildings. Many reported seeing smoke rising from the area of the attack.

The bombing is reported to be the first suicide bombing in the Red Sea city of Eilat. The Israeli government has taken steps to elevate the alert level of the country.

Today's attack is the first in many months and comes only weeks after Prime Minister Ehud Olmert eased travel restrictions and eliminated a number of security checkpoints to terror-riddled Judea and Samaria (West Bank) and the Gaza Strip.

As you can see, Olmert is responsible for this. When he's out of office, he won't be missed.
Posted by Avi Green at 8:24:00 pm

As Charles on LGF says time and again: Have you seen a people more deserving of a state?

These people deserve a MOAB, not a state.

Well, guys, just remember that ol' Ehud comes from a long line of Leftists, who are High Practioners of the Black Art of Political Correctness.

As you are all only too aware, one of the major "Pillars of Political Correctness" is "moral equivalency." This means that one view, one culture, one philosophy, one opinion, one moral code, is just as good as another. In our schools and in civil society in general, the result of this (along with the other "Pillars") is "If one view, culture, moral code, philosophy, opinion, etc. is just as valid as any other, what difference does it make who wins this thing? Why are we fighting? What's all the fuss about?"

But PC goes beyond civil society, and infests the way we fight wars; the "Just War Theory" is the "PC Way of War," and it states, among other things, that the lives of the enemy are worth the same as our own, even on the battle field.

JWT is the only ethics of warfare taught in our military colleges and universities (Walzer's "Just and Unjust Wars" is the textbook), and it is what defines our rules of engagement.

Ehud is a full subscriber to the JWT, and because of this, he ignored the excellent (winning) plan of the Israeli military, which would have destroyed Hezbollah in a matter of weeks. We can indeed thank Ehud for the recent deaths in Israel.

The JWT was fully implemented after WWII, and we can thank it for North Korea, and all the "actions" right up to Iraq today; it is the reason we have not won a war - oops, forgot Grenada - since then. It is the reason for the growing strength of Iran, Syria, Hezbollah; it is the reason Hezbollah, Hamas, and virtually every other Islamic fighting group is successfully operating in Central and South America, and why our borders have not been secured.