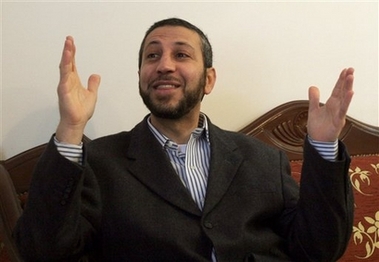 Palestinian Fawaz Damra, a former imam of Ohio's biggest mosque, gestures during an interview at the West Bank town of Nablus, Friday, Jan. 26. 2007. Damra, 46, a Palestinian cleric deported from the U.S., insisted Friday he never had ties to a radical Islamic group and says he has reformed since delivering fiery speeches advocating terror and denouncing Jews. The former spiritual leader was convicted in the U.S. in 2004 of concealing in his citizenship application ties to groups the American government classifies as terrorist organizations. (AP/Nasser Ishtayeh)


I think he tells the truth. After all, if you can't trust a douchebag called Fawaz Damra, who can you trust?

Crossposted at Eye On The World.
Posted by Watcher at 4:21:00 am

Let's try some objectivity...if this guy has changed his mind after (insert the litany of mass murders, attacks and beheadings here), then we should be able to locate his quttbas denouncing religious murder, racism, and Al Qaeda EASILY....
HERE

However, except for the ACLU article, I can find nothing even neutral on this.

So can the Taqqiya, moron