Ridiculous right? Can you see Heinrich Himmler, Joseph Goebbels, Hermann Goering and Martin Bormann holding a conference in to plan the next phase of the Nazi plan to take over the world and the FBI doing nothing to stop it – or the mains stream media even reporting it? 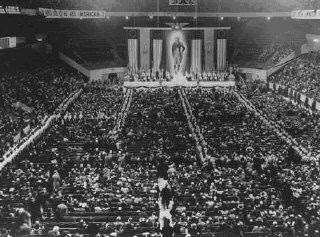 But that’s what’s happening in . Hizb ut-Tahrir Australia, a Sunni group with terrorist ties that openly advocates overthrowing the Democratic Australian Government and replacing it with an Islamic caliphate is hosting a 'Khilafah Conference Program' on the 28th of January. ‘Khalīfah’ or Caliph is the term or title for the Islamic leader of the Ummah, or community of Islam. Khalīfah’ means "successor", that is, successor to the prophet Muhammad. Hat tip to the 910 Group.

Here’s the agenda of the conference.

Sign up for my free WEEKLY STORM REPORT and receive a synopsis of the most important weekly news revealing the intimidation, infiltration and disinformation tactics used to soften-up the non-Muslim world for domination.
Posted by WC at 4:14:00 pm