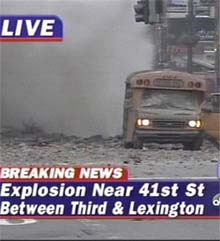 Authorities say that it definitely is not "Terrorism". They don't know what the cause or location of the explosion is, but they have ruled out terrorism!

The NYPD super-obese "Hercules Team" has not, after two hours, shown up at the scene! 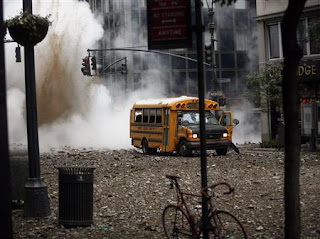 creating a roar and a huge plume of smoke and sending pedestrians fleeing from the area in scenes reminiscent of the September 11 attacks.
Police at the scene said 15 to 20 people had been taken to the hospital. CNN said three of the injured had been admitted to the New York Presbyterian Hospital emergency room.
In Washington, a U.S. Department of Homeland Security official said there was no apparent link to terrorism.
"Right now it is a localized incident," said the official, speaking on condition of anonymity. "At this point, we see no nexus to terrorism."
Officials said a ruptured steam pipe appeared to have caused the transformer to blow.
"This is not a terrorist-related incident. It's a steam explosion," said Deputy New York Police Department Commissioner Paul Browne.
The explosion erupted during the evening rush hour in one of the busiest sections of New York City, near the transportation hub of Grand Central station.
A loud constant roar rang out through the streets.
"We have a building that's a bit shaky, but nothing has collapsed," a police spokeswoman said, contradicting a witness report from the scene that a building had collapsed.
Pedestrians sprinted from the scene, many with cell phones glued to their ears, some crying. Some were covered in white ash and soot.
"It looked like the World Trade Center had exploded. I saw rocks and pebbles coming down. As I was running I got pelted in the head by rocks and concrete. Steam came up and then the ground started breaking up," said Reggie Evans, an office administrator who was covered in mud.
Another man said he was drinking in an Irish pub near Grand Central station when security guards rushed in and told everyone to evacuate and head west.
"There is debris falling, get back," a fireman told onlookers. People were being kept a block away.
Posted by Pastorius at 1:55:00 am

No wonder I hate New Yoik.. You caint even sit in the pub sippin a pint without somethin fuggin it up !!

I bet the assholes wont even let you have a ceegar with your pint either..

New York! What a town!

It happened on the West side of 41st and Lexington Ave. I was like a block away in the office. At first I thought it was thunder, but it just kept going for like over 20 minutes it seemed, and it was very very loud.

Very scary, the NYPD says it was not terrorism. They say it was a steam explosion. Smoke and steam went up over the 45th floor. There was no black smoke like a fire though. People were running down Lexington. It was pretty scary, I was positive while in the area that it was terrorism.

There are pictures of a big craterish hole in the middle of the street with a car or small truck sitting in the hole. Terrorists would have had to go under the street to plant some bomb there. That's not the way they would have done it. We all can thing of much more effective and easier ways.

It happened right around the corner from one of the biggest creators of traffic congestion in NYC.

Will Mayor Bloomberg do anything about Park Ave. being blocked off at 42nd street?

I think Mayor Nanny Bloomie is a very arrogant man. I also highly doubt he rides the subway that much. He's the mayor, I want someone driving him around so he can work and make calls and stuff. New Yorkers shouldn't want him wasting all that time on the subway.

We all have to wonder what Bloomberg is really thinking of with this congestion pricing tax scheme. Maybe he mostly just wants a new tax. Just wrap it up in ‘concern for the environment’, and then people can just demonize those who oppose it.

If he cares so much about traffic jams, congestion and air pollution, why does he let Park Avenue be blocked off? Why doesn’t he do anything about that?

It's true, Pershing Square Restaurant blocks Park Avenue going South at 42nd St. for about 12 hours a day/5 months of the year! This Causes Massive Congestion and Air Pollution!

But apparently it does not bother NYC’s Nanny-in-Chief Mike “Congestion Pricing Tax” Bloomberg?

It certainly supports his claim that the city is hugely congested.

Check out the map! Tell your friends!