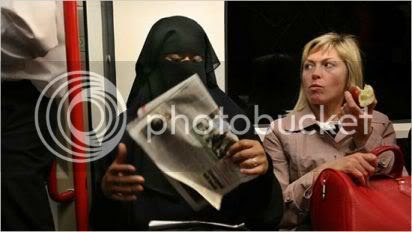 Photo courtesy of the International Herald Tribune
Women covering themselves up is objectionable to many British people, and is seen as a sign of subjugation. British women, along with their sisters in other Western countries, fought long and hard for their liberation and equal rights. They view the veil, especially the full veil, as a step back in time, as a step back to a bygone age. Wearing it is also seen as a clear sign that Muslims do not wish to integrate.

INTERNATIONAL HERALD TRIBUNE - LONDON: Increasingly, Muslim women in Britain take their children to school and run errands covered head to toe in flowing black gowns that allow only a slit for their eyes.

Like little else, their appearance has unnerved Britons, testing the limits of tolerance in this stridently secular nation. Many veiled women say they are targets of abuse. At the same time, efforts are growing to place legal curbs on the full Muslim veil, known as the niqab.

The past year has seen numerous examples: A lawyer dressed in a niqab was told by an immigration judge that she could not represent a client because, he said, he could not hear her. A teacher wearing a niqab was told by a provincial school to go home. A student who was barred from wearing a niqab took her case to the courts, and lost. In fact, the British education authorities are proposing a ban on the niqab in schools altogether.

David Sexton, a columnist for The Evening Standard, wrote recently that Britain has been "too deferential" toward the veil. "I find such garb, in the context of a London street, first ridiculous and then directly offensive," he said.

Although the number of women wearing the niqab has increased in the past several years, only a tiny percentage of women among Britain's two million Muslims cover themselves completely. It is impossible to say how many exactly.

Some who wear the niqab, particularly younger women who have taken it up recently, concede that it is a frontal expression of Islamic identity, which they have embraced since Sept. 11, 2001, as a form of rebellion against the policies of the Blair government in Iraq and at home.

"For me it is not just a piece of clothing, it's an act of faith, it's solidarity," said a 24-year-old program scheduler at a broadcasting company in London, who would allow only her last name, Al Shaikh, to be printed, saying she wanted to protect her privacy. "9/11 was a wake-up call for young Muslims," she said. Head-to-toe Muslim veils test tolerance of secular Britain >>> By Jane Perlez

"9/11 was a wake-up call for young Muslims", was it? Would that be in the same sense as that forwarded by Barack Hussein Obama's pastor Jeremiah Wright when he says 9/11 was a "wake-up call for Whites"? With all these wake-up calls going on, the Muslim world begins to resemble a Holiday Inn at 7 am. What an irony that the vast percentage of Americans hear the wake-up call warning them of danger and just roll over and hit the snooze button.

I see that you have a good sense of humour. Sad thing is that this is the sad truth.

"For me it is not just a piece of clothing, it's an act of faith, it's solidarity," said a 24-year-old program scheduler at a broadcasting company in London...

Solidarity with WHAT? Salafism? The Taliban?