We have problems right here in – eh, , that is. That’s right; has joined the ranks of Bern, Switzerland and smack in the center of ’s heartland rises an Islamic prayer tower that will blast through its loud speakers, several times a day, calling the Muslim faithful to prayer. Hat tip to Weasel Zipper. 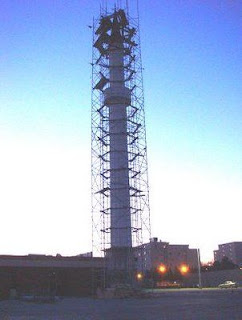 Unlike churches, mosques are not places of spirituality, peace and sanctuary. They are quasi-military citadels and centres of subversion, intimidation and aggression:

"The desire to make mosques more visible has increased, however. In three Swiss cantons there are now building applications for minarets, slender towers topped by a crescent.

The foes of minarets have brought in the heavy artillery. The approximately 100 supporters of a ban, including 35 SVP deputies, declared that Islam was making a 'political-religious bid for power.'

Among the evidence they cited was a remark by Recep Tayyip Erdogan, Turkey's prime minister and ex-mayor of Istanbul, that 'the mosques are our barracks, the minarets our bayonets, the domes our helmets, and the believers our soldiers.'

This, say those seeking a referendum, must be stopped in Switzerland"
- http://news.monstersandcritics.com/europe/features/article_1306209.php/Islam_foes_seek_to_ban_minarets_on_Swiss_mosques

"The noisy call to prayer is an act of dominance and aggression. The louder it is, the better. Mosques were always supposed to be built in high ground, or in the most imposing spot, towering over churches and synagogues, in the lands first conquered by Islam.

Those aggressive skyward thrusting minarets were symbols of power, of dominance. And the same thing continued wherever Islam went.

Some fail to understand that the placement of mosques, the size of mosques, the significance of minarets, and those calls or cries, now electronically amplified, are all part of a single system. That system is one by which the mosque is not merely or mainly a place of worship, but a place of community gathering... of plots and schemes. It is even -- as we see even here and there in Europe -- a place to store weapons, explosives, false papers in false ceilings -- and a place from which to fire on Infidels

The easy, and comforting, belief in the West that it is merely a "house of worship" is something that Infidels must disabuse themselves of....

The muezzins wail ...would be an intolerable display of triumphalism. If Oxford allows the call to prayer between 6 a.m. (but not earlier) and 10 p.m. (but not later), what will this do to the sleep patterns, and peace of mind, of all the non-Muslims who, presumably, still live in Oxford?

If it is allowed, the very fact that it will disturb Infidels will not disturb Muslims, but will be triumphantly taken -- as each little victory is taken -- as a sign that the barriers to the spread and dominance of Islam are being dismantled. Some are being dismantled by a display of sweetness-and-light, some by a display of something quite different -- but the goal remains the same.

Each new victory swells the hearts of Muslims, and causes, here and there, among the pool of Infidels who are psychically vulnerable to the appeals of the well-financed, non-stop campaigns of Da'wa (Every Man Is His Own Missionary in Islam), more to see it as the coming thing.

One may look at what happened in Granada. There, the Spanish government, thinking to do the grand thing, allowed a mosque to be built. It was built, on the highest ridge in the city. It now overlooks a nunnery. And the nuns have been complaining ever since that the noise from that mosque has permanently disrupted their own existence, their own necessary quiet, as the Call to Prayer (and indeed, other noises) suppress any possibility of contemplation."
- http://www.jihadwatch.org/dhimmiwatch/archives/019920.php


Exactly the same thing has happened at Bodh Gaya - the most holy site of Buddhism - where the meditation of peaceful Buddhist monks is deliberately disturbed by prolonged playing of this amplified cacophony from the nearby Mosque: http://www.frontpagemag.com/Articles/Read.aspx?GUID=%7B7FADB733-E103-4493-9216-28C2B668DD29%7D

Moreover, the caterwaul that dhimmies refer to as a 'call to prayer' is actually far more offensive than that. It is an assertion screeched over an English city in Arabic stating that Islam is the only true religion, that a psychopathic murdering pedophile is a greater spiritual leader than Jesus, and that everyone should worship the Man in the Moon - aka Allah.

Ray Boyd said: "Fxxxx Them!! There should be zero tolerance of minarets and the arrogant superiority that they represent. Raze 'em to the ground, legally. Otherwise (delectable deleted). When discussing such things choice of words paramount. Correct words can be (delectable deleted)!"

Pastorius comment: Hah hah, Ray. I appreciate the attempt at humor, but I don't think the FBI has the time to waste making intellectual distinctions betweens satire and a true call for violence.

You are aware of my needs even before I ask You! Yes master I desperately need this transfer in my job! I am so fed up of endlessly waiting for my transfer.

Father Your word says that You are the one who opens doors which none can shut. All authority, power and rules are in Your hands and hence please speak to the concerned person and help me get my transfer .I am living away from my loved ones and I feel very lonely. I have totally lost interest in my job and I feel that I cannot go on any longer. Please go before me and remove the entire obstacles Lord!

Lord! The scriptures say that the king's heart is in Your hands and You turn out when ever You wish. Yes master I acknowledge Your omnipotent power and I plead You to grant me favour in the eyes of my authorities so that I can secure my transfer. O Lord almighty! I bow before in all humility and expect You to fulfill my desires .I thank You even now for making this possible .I shall ever remain grateful to You for this miracle Lord. In Jesus' name I pray.