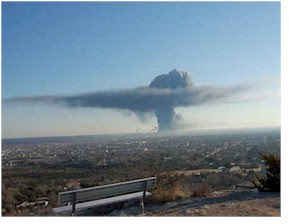 18 February 2008: A massive explosion rocked the ALON oil refinery in Big Spring, Texas shortly after 8:00 a.m. local time today, blowing out windows and shaking houses and businesses up to 25 miles away. Despite the magnitude of the explosion and fire, officials are reporting that eleven people were injured from the blast at the refinery, one critically, a toll likely minimized by the President's Day holiday.
ALON employs about 170 people and produces about 70,000 barrels a day. A Dallas based company, ALON is a majority owned company by ALON Israel Oil Co. Ltd.
Although no cause for the explosion has been determined, this refinery has reportedly been the target of surveillance within the last 18 months, by at least two men of Middle Eastern appearance.
Given the recent threats by Islamic terrorists to U.S. and Israeli assets in the U.S. and abroad in retaliation for the death of top Islamic terrorist Imad Fayez Mughniyeh, the Northeast Intelligence Network will continue to monitor events pertaining to this explosion.
Posted by Pastorius at 1:21:00 pm

And like Seattle, North Carolina, the snipers, and the other 'incidents' this will slowly fade from the MSM in favor of the ideal of 'hope' and 'change', which will be publicized without critical questions.