Is He The One? 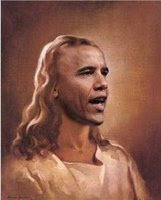 Did you see that Obama has renounced Farrakhan? What do you make of that?

As a Brit, I really can't understand all this 'Obamamania'. People are talking about this man as though he were the Messiah!

I am singularly unimpressed by this man. He has no experience to speak of, but wants to lead the Western world in a time of crisis - economic and political.

People talk of him as though he were some kind of pin-up boy. Please forgive me for saying it, but if Western society has been reduced to swooning over someone like this, then there's no hope for us. Many, many men are far better looking than Obama. Sorry Hussein!

And how can people vote for this man when they know so little about him, and know neither what his policies are nor what he truly stands for. Let him get more experience first, and let's find out more about him. Perhaps then, he will be ready for the White House.

Politics has been reduced to the sound-bite. This doesn't augur well for the future of democracy and freedom.

And then there was his cocaine habit. Is everyone going to overlook that, too?

Hillary Clinton, for all her faults, has experience aplenty. I know what my choice would be if push came to shove. At this difficult time in the history of America, I would plump for experience.

And remember this, Clinton might have liked a blow job now and then, but he left the economy in good shape. That's more than can be said for Bush, and it is probably more than we shall be able to say about Barack Hussein Obama, since about all I have heard from his lips is socialist rhetoric - spend, spend, spend.

I hope that my American friends will be more discerning than they are now when the time to vote comes. I hope they will get over their little love affair with inexperienced politicians.

I happened to see the image while the news was presenting a segment on exorcisms, with that eeerie music from The Exorcist playing in the background.

Mark,
The word here in the D.C. area is that Hillary is now being encouraged by many Dems in the Senate to abandon her run for the Presidency and seek a higher position in the Senate--whip, majority leader, etc.

The Texas and Ohio primaries will tell the tale. Obama is gaining, according to the polls.

As to American voters, they are notoriously unpredictable. They also often tend to vote with their hearts and not their heads.

Obamamania may not be stoppable.

America is in for a rough ride, no matter who gets elected!

Obamamania may not be stoppable.

It's stoppable alright, even though it might appear that it isn't right now. Believe that it is unstoppable, and it will be so. Don't forget, something unforeseen and unfortunate might yet happen, something which could stop the train. Then, of course, the Republicans might be able to stop him, too.

I am amazed by how naïve Americans can be. They seem to love fairytale scenarios. I guess it's all part and parcel of the American dream.

America is in for a rough ride, no matter who gets elected!

We, too, are in for a rough ride because of America's bad fortunes. It matters to us, too, who gets elected as president here in the States. Look how we've had to suffer under Bush.

Mark said: "I am amazed by how naïve Americans can be. They seem to love fairytale scenarios.

By the way, my problem with Obama is his lack of experience, his unwillingness to talk specifics, his cockiness, and not knowing exactly where he stands on Islam. There are too many unanswered questions for my liking. He's also a blowhard. Blowhards are almost always filled with hot air.

Check this out. Some more dirt on Obama, and how to stop him.