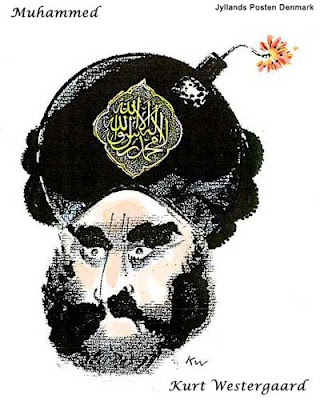 "All European newspapers should print the [Mohammed] caricatures with the explanation, 'We also think they're pathetic, but the use of press freedom is no reason to resort to violence," Schaeuble told the weekly edition of Die Zeit.

The minister added that he "respected" the decision of 17 Danish newspapers earlier this month to reprint a cartoon depicting the Prophet Mohammed with a turban that resembled a bomb with a lit fuse. The re-publication came a day after Danish authorities uncovered and foiled a plot to murder the cartoonist whose drawing first appeared in 2005.
Schaeuble's statement coincided with protests in Sudan over the reprinting. In a demonstration organized by numerous Islamist movements, some 10,000 people marched through Khartoum on Wednesday, Feb. 27.

The protestors demanded that diplomatic ties with Denmark be severed and expressed support for a boycott on Danish products declared by the Sudanese government on Monday.

"Bin Laden strike again" and "Jews, Jews, the army of Mohammed is coming back," shouted the marchers.

Since the cartoon was reprinted two weeks ago, similar protests have been held in Iran and Egypt.

What the hell do the Jews have to do with the MoToons, for God's sake?
Posted by Pastorius at 10:33:00 pm