Palestinian TV: Extermination Of Jews Is The Goal Of History 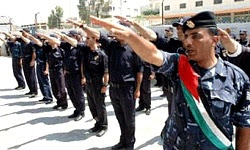 Hitler believed that, if he could just wipe the Jews from the face of the Earth, everything else would fall in line. The Palestinians of Hamas and Fatah clearly believe the same thing. Their eschatology tells them the same thing. If the world is to be perfected, we must wipe out the Jews.

Whether you believe in God or not, is this not a profoundly Satanic view of the world?

From Barbara Cook and Itamar Marcus:


The final stage of history will be the subjugation of all Christian countries under Islam and the extermination of every single Jew - this according to the Palestinian Authority (PA) religious leader during Friday's Sermon. The Jews are so evil, Ibrahim Mudayris teaches, that they cannot be subjugated like the Christian countries, and therefore the only solution awaiting them is death - literally the extermination of every Jew. In his words: "The day will come and we shall rule America, Britain, we shall rule the entire world, except the Jews."

In the sermon Ibrahim Mudayris reiterated many of the often-repeated PA justifications for the anticipated genocide, including the following hate messages:

1) The Jews have inherently evil character traits that Muhammad warned Muslims about in the Koran.

2) The Jews have been the source of conflict throughout all of history: "The Jews are a virus similar to AIDS, from which the entire world is suffering."

3) The persecution of Jews throughout history is presented as natural responses of self-defense by numerous countries against the evil of the Jews. Britain, France, Portugal, Czarist Russia, Nazi Germany, all persecuted and/or expelled Jews - as acts of self-defense and revenge.

4) Zionism was created by Britain in order solve its Jewish problem by sending them to Israel.

5) God has predetermined that the Jewish problem will be solved with the extermination of the Jews.

6) God has predetermined that the Christian -Islam interactions will end with today's Christian countries under Islam.

7) Israel has no right to exist and will be destroyed.

PMW's report: Kill a Jew - go to Heaven - a full report outlining the PA systematic justification of genocide, can be found on the PMW web site.

Koran: "Indeed you will find that of all mankind, those with the strongest hatred of the believers are the Jews and the pagans." al-Maada : 82 [the Table]

"There is no god but Allah, Who warned His Prophet and Beloved [Muhammad] of the Jews; who murdered their prophets, and falsified their Bible; who were corrupt and corrupted throughout their existence; [and] violated their treaties and agreements. Hundreds of verses about them came down [from the heavens] and appeared in the Koran. And in them it is told of the corruption of their qualities and their evil intentions. Had Allah not protected your Beloved, he would have been a victim of the Jews' treachery, he would have been one of the thousands of prophets that were murdered by the Jews.

This [May 15, the day the PA marks Israel's Independence] is the hardest day of remembrance for the Palestinian people … because with the loss of Palestine, the Arab nation was lost, and with the establishment of the false State of Israel, the whole Muslim nation was lost.

With the establishment of the State of Israel, the entire Muslim nation was lost because Israel is a cancer that spread in the body of the Islamic nation; because the Jews are a virus similar to AIDS, from which the entire world is suffering. This has been proven in history. Read the history! I don't want you to read the Koran, because the Koran is clear and permanent and we all believe it, but for those who do not believe the Koran, we say to them: read the history...

You'll find that Jews behind every conflict on Earth. The suffering of nations? The Jews are behind it! Ask Britain! What did it do to the Jews at the beginning of the sixth century? What did they do to the Jews? [They] chased them down them, made them suffer, and prevented them from entering for more than 300 consecutive years... Ask France what it did to the Jews! They made them suffer, chased them down and burned their Talmud, for the conflicts that they [i.e. Jews] tried to ignite in France in the period of Louis XI. Ask Portugal what it did to the Jews! Ask Czarist Russia - who hosted the Jews and they plotted to murder the Czar!

And they were massacred again and again. Don't ask Germany what it did to the Jews, since the Jews are the ones who provoked the Nazis so the world would go to war against it. On the day the Jews provoked - through the Zionist movement - the nations of the world to fight Germany economically, and to boycott German goods; on the day that they incited Russia, Britain, France and Italy, the anger of the Germans toward the Jews increased significantly, and what happened - happened at that time so that [Holocaust] Remembrance Day is commemorated by the Jews to this day.

Know, O Muslims, that the Jews in their conferences, led by the cursed Herzl did not set Palestine as their goal for the establishment of a national home...

Anyone who says that the Jews have any rights to this land aside - besides being occupiers. And they will disappear!...

Allah is the one who says that the Jews have the character of cowards; they fear Muslims more then they fear Allah...

We [Muslims] have ruled the world [in the past] and a day will come, by Allah, and we shall rule the world [again]. The day will come and we shall rule America, Britain, we shall rule the entire world, except the Jews. The Jews will not live under our rule agreeably permanently, since they have been treacherous in nature throughout history. A day will come when all shall rest from the Jews, even the tree and the stone, which have suffered from them. Listen to your Beloved [Muhammad], who tells you about the most dire end awaiting the Jews. The tree and the stone want the Muslim to bring every Jew to his end. You all know the Hadith." *

* Mudayris here is referring to following Hadith: "The Hour [Resurrection] will not come until the Muslims make war against the Jews and kill them, and until a Jew hiding behind a rock and tree, and the rock and tree will say: 'Muslim, servant of Allah, there is a Jew behind me, come and kill him!" He explains that the fulfillment of the often-preached Hadith means the extermination of every last Jew is Allah's will and is, thus, inevitable.


After the Holocaust, the world said, "Never Again." The world, however, now watches as the beginning stages of another Holocaust of Jews is being plotted. I don't hear the Christian church stepping up and saying anything. The governments of the world do not unite to stop the problem. Even the Israeli government, itself, calls for compromise with those who would murder their people.

You can not compromise with evil. And, if this isn't evil, then I don't know what is.
Posted by Pastorius at 3:30:00 pm

Hello Sir/Satan,
You r one of the sick Bast**d I have ever read the article of. I know, all you have is a biased harted against Jews. I have a similar hate against muslims. So what, r u proposing any solution here. I hope not. If it is a war you are preaching then lets do it lunger; yes you are not more than a lunger and your bortherhood would be destroyed and your veilful women would be given a freedom of their sexual choice.
Mr. hate, I dont believe in god, not at all, but I do believe in good and humanity. I dont differentiate among nationality or color or religion cos your hate and love is a mirror image of each and every individual that live in this earth. What i mean is this, if you fuck with me I will fuck with you too and does everybody does. So just live this life being a good person rather than preaching hate and anger against others. Its does not provide solution. Ask your wife, she might be thinking of somebody else when she sleeps with you. I am sorry. But ask her. Ok. next time we would talk more about rationale reasoning and facts rather than your bullshit ill and biased feeling for others. Do some homework and study more on helping man kind who are suffering everyday because of hunger and diseases like in africa and even in your fucking country. Just dont make sound cos you have a mouth. Take care