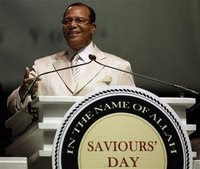 Louis Farrakhan is not fit to tie the sandals on Obama's feet, but that didn't stop him from hailing Obama as a savior, and comparing him to the founder of Nation of Islam. From Reliapundit, the Astute Blogger:

IF THIS DOESN'T SCARE YOU, NOTHIN' WILL:
In his first major public address since a cancer crisis, Nation of Islam Minister Louis Farrakhan said Sunday that presidential candidate Barack Obama is the "hope of the entire world" that the U.S. will change for the better.
The 74-year-old Farrakhan, addressing an estimated crowd of 20,000 people at the annual Saviours' Day celebration, never outrightly endorsed Obama but spent most of the nearly two-hour speech praising the Illinois senator.
[NOTE: In the photo, on the podium it says: IN THE NAME OF ALLAH."]
"This young man is the hope of the entire world that America will change and be made better," he said.
"This young man is capturing audiences of black and brown and red and yellow. If you look at Barack Obama's audiences and look at the effect of his words, those people are being transformed."

Pastorius note: Farrkhan said black, brown, red, and yellow people are being transformed. This even though the bulk of Obama's audiences are made up of white people. It wouldn't be surprising if Farrakhan thought white people to be incapable of transformation, considering the Nation of Islam believes white people are the devil. Of course, the media doesn't tell you that, do they?

America has been up so long, it looks like down to Louis.
I like what Charles has to say about this:
There’s really no doubt that Louis Farrakhan is a preacher of hatred; his antisemitic statements are legendary, he’s a notorious supporter of Saddam Hussein and Robert Mugabe and countless other thuggish dictators, and he toured the Middle East in 2002 giving vicious speeches against Israel and the United States in the capitals of the Arab world.
Now, Barack Obama can’t control who endorses or praises his campaign, of course, but if he cares at all about doing the right thing he’ll renounce this support from one of the most hateful, divisive figures in US politics.
Don’t worry, I’m not holding my breath.
UPDATE: Well, what do you know? Obama does renounce Farrakhan.
I have been a consistent, before I go any further, a consistent denunciator of Louis Farrakhan, nobody challenges that. And what is true is that, recently this is probably, I guess last year. An award was given to Farrakhan for his work on behave of ex-offenders completely unrelated to his controversial statements. And I believe that was a mistake and showed a lack of sensitivity to Jewish community and I said so.
Posted by Pastorius at 4:14:00 am

Said so to whom? I want to see proof of Obama being a "constant denunciator of Louis Farrakhan", a detailed explanation of why he denounces him, and I want to see it going back years. I want to see a substantive discussion with Rev. Wright, whose organization awarded Farrakhan, on why and for how long he and Obama have fundamentally disagreed about him and the Nation of Islam, and I want to hear from corroborating witnesses that their stories add up. I other words, I ain't buying it. This smells to high heaven of cynical manipulation. Obama knows Farrakhan can deliver him votes, Obama employs NOI people, and yet he "consistently denounces" the head of the NOI? As Drew Barrymore once put it, "Give me a BREAK!!"

You're asking an awful lot there, RRA.

Voters will believe what Obama says just because HE says it.