The Terrible Pig Wars Of The 21st Century 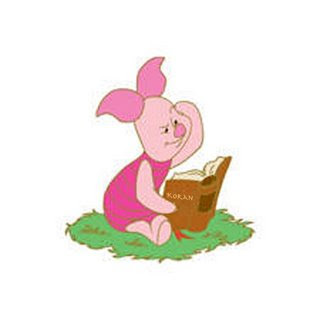 Oh d-d-dear, why do they hate me so?
Yeah, I know, you thought when we reached the 21st century that, if we had not already ascended "beyond war", well, we'd be fighting wars in space, with particle beams, and lasers, and all sorts of Star Wars stuff.
But instead, we are fighting the barbarians of the 7th century and they're using their retarded people to blow us up.
Now, an even more pathetic and degrading episode of our war has begun. The Terrible Pig Wars are sure to be a series of battles stretching through much of the 21st century, wherein hundreds of thousands, if not millions of Muslims freak out, riot, and piss themselves over the public display of pigs.
Meanwhile, I predict it will all end like this;
We'll treat the Islamonutheads like the pigs they are, and we'll treat their women, well, you know how we treat our women.

"LEICESTER -- Police here in central England seized a collection of porcelain pigs from a house's window sill after Muslims complained that they were offensive.
"I just couldn't believe it, I didn't know whether to laugh or cry," Mrs Nancy Bennett, the owner of the 17 miniature pigs, told the Sun tabloid newspaper.
The porcelain figures were held at the local police station, while Mrs Bennett was threatened with prosecution if she replaces the collection. Her house is located in the same street as the city's main mosque, meaning that Muslim worshippers often passed by her front window where the pig figurines were on display. "

And this:
A historic statue of a wild boar is unlikely to return to Derby's Arboretum, because it could offend Muslims living nearby.
The Florentine Boar stood in the Derby park from 1840 to 1942, when it was beheaded by flying masonry during an air raid.
Derby City Council had hoped to replace the statue with an identical replica when plans for a massive overhaul of the park were first considered a decade ago. But following reservations raised by some people in Normanton about a new boar statue, the authority decided to consult with local community leaders.
At a meeting of the council's minority ethnic communities advisory committee it was recommended that the boar be replaced with something else because of the strength of feeling among nearby residents as pigs are perceived as offensive creatures by many Muslims.
Derwent Ward councillor Suman Gupta said, "If the statue of the boar is put back at the Arboretum I have been told that it will not be there the next day, or at least it won't be in the same condition the next day at least. We should not have the boar because it is offensive to some of the groups in the immediate area."

There are many devoted collectors of pig figurines and other piggy collectibles out there just looking for encouragement. You know what to do.

Lost to broad public attention is an insidious epidemic of pig tapeworms contracted by humans sweeping across West Papua and Papua New Guinea. A horribly pathological infection known as cysticercosis in humans has been running rampant for over 15 years in West Papua. Cysticercosis in humans comes from eating worm infested pigs. Although pigs have been a part of Papuan culture for thousands of years, the disease has never previously been anywhere on the island of New Guinea before 1970.

This paper is the result of an investigative search through often obscure medical literature. The author exposes the story of how, in 1971, the Indonesian military intentionally introduced infected pigs from Bali to the Me people of the Paniai Lakes highlands of West Papua. A Fourth World war is waging in West Papua and the Indonesians have the advantage of worm-infected pigs as a biological warfare tool of counter-insurgency. First, Professor Hyndman explains the pig-to-human tapeworm cycle to show the full implications of cysticercosis as an infection of pigs and humans. The Queensland University Professor describes the first West Papuan epidemic of cysticercosis in detail. He then illustrates the use of the disease for biological warfare by the government of Indonesia. Finally, Professor Hyndman proposes methods for combating the tapeworm outbreak.

I think that the base of nourishment in the UK is precisely pig. what would be the Uk without their traditional breakfasts that all Europeans from overseas look forward so devotely when we visit you. Of course going to a good indian and a good chinese is something I look forward too in fact contrary to what most European think I expect devotely to come to your country to eat with pleasure but that`s because there is variety and I have to say and that the collections of pigs in English gardens makes you different.---don´t spoil this variety that makes you unique and as usual you have been an example to follow I think you are the only ones who have gone past the idea of everything different is cool because you know perfectly right how to preserve your traditions and this muslims don`t forget live at your expense but allowing them to tell you what to do in your own house is a little bit too much if they don`t like the benefits they get living in your country and remember YOUR country they should go back to their own country I`m sure the majority would even think about it. Lots of love from Barcelona where unfortunately are starting to copy you when you already know your good samaritan way doesn`t work.