One prime thesis at my blog was that if muslims COULD have a democracy over the long run then..

democratic pressures would HAVE TO dilute and minimize jihadism regardless of its religious primacy.

This is the underlying thesis of the so called neo cons

Looking at places with voting such as Pakistan with the MMA's victories and programs, and Gaza, and the muslim brotherhood's generationally long (1930's) popularity gives one a long pause.

Islam at the Ballot Box

Pakistan's election has been portrayed by the Western media as a defeat for President Pervez Musharraf. The real losers were the Islamist parties.

The latest analysis of the results shows that the parties linked, or at least sympathetic, to the Taliban and al Qaeda saw their share of the votes slashed to about 3% from almost 11% in the last general election a few years ago. The largest coalition of the Islamist parties, the United Assembly for Action (MMA), lost control of the Northwest Frontier Province -- the only one of Pakistan's four provinces it governed. The winner in the province is the avowedly secularist National Awami Party. 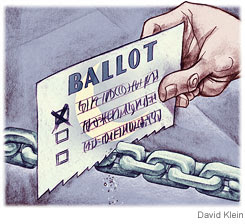 Despite vast sums of money spent by the Islamic Republic in Tehran and wealthy Arabs from the Persian Gulf states, the MMA failed to achieve the "approaching victory" (fatah al-qarib) that Islamist candidates, both Shiite and Sunni, had boasted was coming.

The Islamist defeat in Pakistani confirms a trend that's been under way for years. Conventional wisdom had it that the wars in Afghanistan and Iraq, and the lack of progress in the Israel-Palestine conflict, would provide radical Islamists with a springboard from which to seize power through elections.

Analysts in the West used that prospect to argue against the Bush Doctrine of spreading democracy in the Middle East. These analysts argued that Muslims were not ready for democracy, and that elections would only translate into victory for hard-line Islamists.

The facts tell a different story. So far, no Islamist party has managed to win a majority of the popular vote in any of the Muslim countries where reasonably clean elections are held. If anything, the Islamist share of the vote has been declining across the board.

Take Jordan. In last November's general election, the Islamic Action Front suffered a rout, as its share of the votes fell to 5% from almost 15% in elections four years ago. The radical fundamentalist group, linked with the Islamic Brotherhood movement, managed to keep only six of its 17 seats in the National Assembly. Its independent allies won no seats.

In Gaza and the West Bank, Hamas -- the Palestinian branch of the Muslim Brotherhood -- won the 2006 general election with 44% of the votes, far short of the "crushing wave of support" it had promised. Even then, it was clear that at least some of those who run on a Hamas ticket did not share its radical Islamist ideology. Despite years of misrule and corruption, Fatah, Hamas's secularist rival, won 42% of the popular vote.

In Turkey, the Justice and Development Party (AKP) has won two successive general elections, the latest in July 2007, with 44% of the popular vote. Even then, AKP leaders go out of their way to insist that the party "has nothing to do with religion."

"We are a modern, conservative, European-style party," AKP leader and Turkey's Prime Minister Recep Tayyib Erdogan, likes to repeat at every opportunity. In last July's general election, the AKP lost 23 seats and, with it, its two-third majority in the Grand National Assembly.

AKP's success in Turkey inspired Moroccan Islamists to create a similar outfit called Party of Justice and Development (PDJ). The PDJ sought support from AKP "experts" to prepare for last September's general election in Morocco. Yet when the votes were counted, the PDJ collected just over 10% of the popular vote, winning 46 of the 325 seats.

Islamists have done no better in neighboring Algeria. In the latest general election, held in May 2007, the two Islamist parties, Movement for a Peaceful Society and Algerian Awakening, won less than 12% of the popular vote.

In Yemen, one of the Arab states where the culture of democracy has struck the deepest roots, a series of elections in the past 20 years has shown support for Islamists to stand at around 25% of the popular vote. In the last general election in 2003, the Yemeni Congregation for Reform won 22%.

Kuwait is another Arab country where the holding of reasonably fair elections has become part of the national culture. In the general election in 2006, a well-funded and sophisticated Islamist bloc collected 27% of the votes and won 17 of the 50 seats in the National Assembly.

In Lebanon's last general election in 2005, the two Islamist parties, Hezbollah (Party of God) and Amal (Hope) collected 21% of the popular vote to win 28 of the 128 seats in the parliament. This despite massive financial and propaganda support from the Islamic Republic in Iran, and electoral pacts with a Christian political bloc led by the pro-Tehran former Gen. Michel Aoun.

Many observers do not regard Egypt's elections as free and fair enough to use as a basis for political analysis. Nevertheless, the latest general election, held in 2005, can be regarded as the most serious since the 1940s, if only because the Islamist opposition was allowed to field candidates and campaign publicly. In the event, however, Muslim Brotherhood candidates collected less than 20% of the popular vote, despite widespread dissatisfaction with President Hosni Mubarak's authoritarian rule.

Other Arab countries where elections are not yet up to acceptable standards include Oman and Bahrain. But even in those countries, the Islamists have not done better than anywhere else in the region. In Tunisia and Libya, the Islamists are banned and thus have not put their political strength to the electoral test.

Afghanistan and Iraq have held a series of elections since the fall of the Taliban in Kabul and the Baath in Baghdad. By all standards, these have been generally free and fair elections, and thus valid tests of the public mood. In Afghanistan, Islamist groups, including former members of the Taliban, have managed to win around 11% of the popular vote on the average.

The picture in Iraq is more complicated, because voters have been faced with bloc lists that hide the identity of political parties behind a blanket ethnic and/or sectarian identity. Only the next general election in 2009 could reveal the true strength of the political parties, since it will not be contested based on bloc lists. Frequent opinion polls, however, show that support for avowedly Islamist parties, both Shiite and Sunni, would not exceed 25% of the popular vote.

Far from rejecting democracy because it is supposed to be "alien," or using it as a means of creating totalitarian Islamist systems, a majority of Muslims have repeatedly shown that they like elections, and would love to join the global mainstream of democratization. President Bush is right to emphasize the importance of holding free and fair elections in all Muslim majority countries.

Tyrants fear free and fair elections, a fact illustrated by the Khomeinist regime's efforts to fix the outcome of next month's poll in Iran by pre-selecting the candidates. Support for democratic movements in the Muslim world remains the only credible strategy for winning the war against terror.