Present at the Coronation of King Obama? 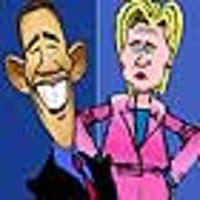 Why is Obama smiling? Perhaps if this wonderful, charismatic speaker, this man who has risen so quickly that he is still basically a State Senator in mental outlook truly understood what he was getting into, he would show a bit more concern.

Obama tried speaking about substance when he mentioned the conflicts in Iraq and Afghanistan, and he displayed an astounding ignorance of the military instrument. He said that an anonymous U.S. Army captain told him that his infantry platoon was split and sent to different areas of operations; that they were lacking vehicles; and that they had insufficient ammunition to fight.

Although problems do occur in combat situations to be sure, none of what Obama related makes any sense ...

Politicians rely heavily, on almost every subject, on advisors to get them educated and keep them current. And nobody really expects Obama or Clinton or even McCain, who was a Navy aviator, to know anything about ground combat. But one does expect the candidate to employ advisors who know what they are talking about and to prevent their candidate from embarrassment.

While Obama has attracted money, notoriety and delegates, he has yet to attract military advisers who know what they are doing. ___Source

Who is Obama truly depending on, as advisors? Is he depending on the "poster-boy" economic and policy advisors put forward by his campaign, or is he performing as required for the "campaign show", while intending to fall back on his most pivotal and most trusted advisors once the deal is done? I suspect that Michelle Obama will play a very strong role in any Obama administration. A very alienated Michelle, with a strong sense of entitlement and victimisation--a dangerous combination indeed.

"Dreams of My Father", the 1995 Obama autobiography contains many clues. There may just be enough time between now and November to learn enough about the hidden core of this man who would be king.
Posted by al fin at 5:46:00 pm