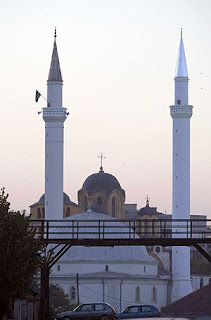 From Ilana Freedman at the Gerard Group:
Wahhabi Mosque In Kosovo

Sunday's unilateral declaration of independence from Serbia by Kosovo is likely to have serious consequences, not only in the Balkans, but around the world.

Serbia called the declaration illegal and Russia denounced it. The United States, however, was among the first to recognize Kosovo as an independent nation, complicating a growing breach with Russia, China and some EU members, who are vehemently opposed to letting Kosovo break away from Serbia.

Minimally, this event threatens to touch off a new conflict in the Balkans. Riots have already broken out in Belgrade. According to our source in Belgrade, "Serbia is about to go up in flames" as thousands of ethnic Albanians, Muslims who represent 90% of Kosovo's two million people, have stated their claim on the new state.

According to our source, a systematic ethnic cleansing of Kosovo's remaining Christian inhabitants has been going on for several years and will now likely escalate.

Since we have been supporting 'democracy' in Kosovo, and have ignored the strong Albanian Islamic influence in political affairs there, we have opened the gates to a new Islamic state, complete with terrorist training camps on the ground and a global network through which to funnel their graduates.

This begins a trail that leads to (but does not end in) New York City, where the 'Albanian Mafia' has taken over much of the drug and organized crime trade. The combination of the legitimization of their terrorist activities in Kosovo, their links to the US, and the fall of Serbia (partly self-inflicted) may spell a new era of unrest and confusion that will mean danger for US interests everywhere.

Kosovo's move has opened a Pandora's Box that is likely to release forces that will spin out of control very rapidly. Separatist movements in many parts of the world can take heart from Kosovo's move and sow the seeds of chaos in a world that is already reeling from the effects of Islamic terror.
Posted by Pastorius at 9:11:00 pm

Stratfor says Russia is not able to do squat militarily yet, but they can exert energy pressure on Europe thru gas lines, and supply.

I still don't see what we had to gain by immediate recog.

Kosovo has everything to prove. Recognition and continues NATO protection and administration should have been conditional on Kosovo meeting conditions.

What do we have to gain?

We in the West are encouraging Islam to proliferate. Madness!

Hey y'all, I finally got the new eMachine up and running. Set-up has improved since I figured out how to turn the monitor on. IBA is the first thing I've found so far. I haven't even located my ISP home page yet.

I don't see what anyone has to gain by recognizing Kosovo, other than a place at the head of the line to feed the crocidile.

Either I lack a sufficient sense of humor, or the two of you lack a map.