Obama: Muslim Call To Prayer "One Of The Prettiest Sounds On Earth" 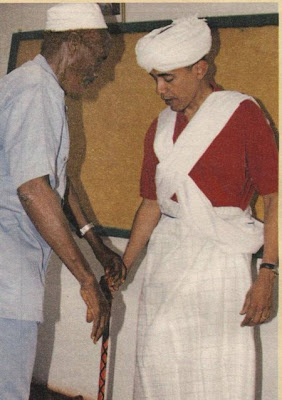 This story will remain at the top for awhile.

Yes, he said that!

Right after he recited a Muslim prayer.

Is America soon to have a Muslim President?

From Nicholas Kristof at the New York Times:


Mr. Obama would bring to the White House an important experience that most other candidates lack: he has actually lived abroad. He spent four years as a child in Indonesia and attended schools in the Indonesian language, which he still speaks.

“I was a little Jakarta street kid,” he said in a wide-ranging interview in his office (excerpts are on my blog, www.nytimes.com/ontheground). He once got in trouble for making faces during Koran study classes in his elementary school, but a president is less likely to stereotype Muslims as fanatics — and more likely to be aware of their nationalism — if he once studied the Koran with them.

Mr. Obama recalled the opening lines of the Arabic call to prayer, reciting them with a first-rate accent. In a remark that seemed delightfully uncalculated (it’ll give Alabama voters heart attacks), Mr. Obama described the call to prayer as “one of the prettiest sounds on Earth at sunset.”

Moreover, Mr. Obama’s own grandfather in Kenya was a Muslim. Mr. Obama never met his grandfather and says he isn’t sure if his grandfather’s two wives were simultaneous or consecutive, or even if he was Sunni or Shiite.


You see that Nicholas Kristof seems to think this is great. Obama brings experience that other candidates don't have.

Yeah, he sure does.

And, what was the prayer Obama recited? Death by a Thousand Papercuts says this is it:


Well, if he wasn't a Muslim before, he is now. Or, I should say, Muslims would consider him a Muslim, for having said that prayer.

That's the way it works. And, by the way, I'm sure Obama knows that to be true.


One has to wonder if this might be some of the most momentous and horrendous news ever reported on the American scene.

I can't wait to hear all of the "excuses" for this.

God help us, God help this country wake up before it is too late.

We saw this coming Pastorius. But, we sure didn't see it happening so soon.

This story (the Kristof column) is almost a year old.

Someone has to get the story to Hilary. I'm guessing she could put it to good use. Although, she does seem to blow everything, uh, except Bill.

Nicholas Kristof prooves himself to be a profoundly uninformed man in that article, doesn't he?

Just as uninformed as the crowd he hangs with.

And as intelligent as Obama wants him to be.

God help us, indeed. Ayn Rand, who was atheist, was always happy to use terms such as "God bless you" because to her it meant the concept of a benevolent universe in which humans could be happy and prosper. Whatever force like that is out there, we need it now because we are heading straight for catastrophe.

Anyone who has a copy of Phares' "Future Jihad" please go over chapter 13 "Projecting Future Jihad" again and ask yourselves how much more likely such a scenario will be with Obamasama in the Oval Office.

Anonymous,
Thanks for the link to the video. I'll save it for a futurek post.

RRA,
I have the book. I'll read the chapter.

Actually, what B-HO recited in a first rate accent to the reporter was the "adhan," the call to "salat" or prayer.
Taking the words of the adhan that he uttered, and comparing them to the "Shahada," the utterance that a muslim must make at some point in there lives, and often do daily, is as follows.
"ASH-HADU ANLA ELAHA ILLA-ALLAH WA ASH-HADU ANNA MOHAMMADAN RASUL-ALLAH”.

The English translation is:

Comparing the words of the adhan to the Shahada, it is easy to see that B-HO is indeed a muslim, and the adoring reporter barely raised an eyebrow.
Taken with the Debbie Schleussel story about Nation of Islam members being employed by B-HO in his D.C. and Illinois Senate offices, as well as his campaign, he is only fooling those who wish to be.

Well put. I think you're right.

So I am an American Muslim and if I read the Bible to gain information about Christianity, then according to your logic I become a Christian...

Or if I read the Kabaala because I happen to understand it, would that make me a jew then?

No... I am an American Muslim who is happy that a black Christian Man understands a little bit more about my faith because he experienced it in the Azan that he copied...

It is time to understand each other's faith in this country... I am not forcing my faith on you neither you can force yours on me... This is a free country and I for one, love it for precisely this beautiful opportunity it affords us to experience the other's point of view...

There are 1 billion (and rising) Muslims in the World, they are not all UBL... just like not all Christians are Adolf Hitler etc...

That sounds fine with me. I like the fact that you aren't forcing your faith on me.

What do you think of the fact that Britain now has Sharia courts dealing with domestic cases?