The Vatican and Al-Azhar university agree 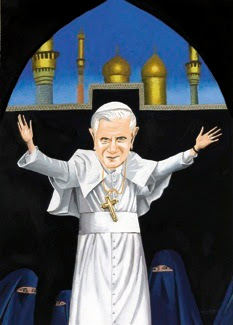 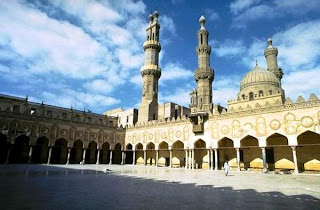 "Both sides vehemently denounce the reprinting of the offensive cartoon and the attack on Islam and its prophet," officials from both religious bodies said in a statement seen by IslamOnline.net.

Concluding a two-day meeting of their joint interfaith committee in Cairo, the two sides also denounced any insult to any religion.

Seventeen Danish newspapers reprinted on Wednesday, February 13, a drawing of a man described as Prophet Muhammad with a ticking bomb in his turban.

The move came following the arrest of two Tunisians and a Dane of Moroccan origin for allegedly plotting to kill the cartoonist who had drew the caricature in 2005.

"We call for the respect of faiths, religious holy books and religious symbols," read the statement.

The two sides urged Muslim and Christian religious leaders, intellectuals and educators to instill such respect in society.

"Freedom of expression should not become a pretext to insult religions and defaming religious sanctities."

The Vatican's position makes no sense to me. It is leading to a complete Dhimmi and roll-over attitude similar to the Head of the Church of England: - The Most Reverend Dhimmi Supreme Arcishop Himself - even though he now tries to retract his earlier statements on his recommendation to introduce Sharia in the UK.

From the blog of Flemming Rose, one of the editors of Jyllandsposten:

Yesterday the Vatican joined the al-Azhar university in Cairo in condemning the republication of Danish cartoonist Kurt Westergaard’s depiction of Muhammed with a bomb in his turban, but the Catholic state and the supreme institution of Islam in the Sunni world didn’t say a word about the foiled plot to kill Westergaard, who has been in hiding since November last year.

And by the way: al-Azhar is a university practicing institutional apartheid. The institution is banned for Jews and Copts, not only the department of theology, but also medicine, economics and agriculture. And speaking about offending religious sensibilities: al-Azhar has shown no willingness to abandon the part of the sharia providing Muslims with the obligation to insult non-Muslims’ religious feelings, while at the same time insisting that non-Muslims offending Muslims’ religious sensibilities should be punished.

I call the Vatican a bunch of Dhimmies. Now is the time to fight back - or do you want Sudanese conditions all over the world?
Posted by von Schlichtningen at 10:29:00 am

Damn! Has the Vatican lost its mind?

Pope Benedict started out so well, and has lost his nerve.

This decision by the Vatican is not consistent with his personality. Nor, was the way he backed down when first he had criticized Islam. At the time, I credited his wisdom in relieving the pressure of the situation, but there has been a change in him which does not come from wisdom.

Could it be that someone in the Islamic world has compromising photos of him?

Concluding a two-day meeting of their joint interfaith committee in Cairo, the two sides also denounced any insult to any religion.

Go ahead, pull my other finger.

If the above quoted statement had any merit, the content of the koran and it's related sira and hadith would be openly criticised as well.

Since it's not, this is a complete and utterly vacant exercise in useless diplomacy.

The vatican is being sensible. It knows the taboo against offending religion can work both ways - by condemning attacks on Islam, it also sets a 'no criticising religion' standard which it can in turn use to shield itsself from mockery. But, if it called for freedom of expression to include freedom to insult islam, it also implies that the same freedom is a freedom to insult catholicism.

Right now, the Vatican appears to consider the lack of religion in europe to be a greater threat then islam.

Suricou Raven,
Freedom ought to be the operative word, especially to a Catholic. Read Catholic literature and you will see that people like Benedict and Weigel stand up for freedom, because that's what God stood up for by allowing us to fall, and then saving our asses anyway. And, now we have the choice, follow or not.