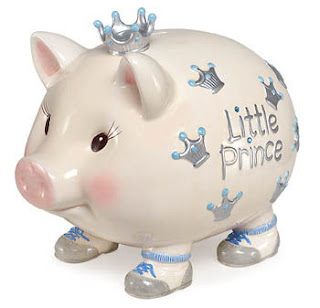 Yes! We righteous believers of Mo have made it. This most horrible of all vile, vile, vile creatures will be banned. No longer will the (capitalist) swines hand out swines to our innocent children.

"Pig belong to the forbidden animals, and not allowed to be eaten by the believers. Pig eats almost anything dirty and they are very lazy animals. It is the most avaricious of all domestic animals. Amongst all animals, pig is the cradle of harmful germs. It's meat serves as carrier of diseases to mankind. It is this very reason that made it unfit for human consumption."

"Forbidden to you for (food) are: dead meat, blood and the flesh of the swine and that which hath been invoked the name other than Allah. "

So fortunately this most unholy and lazy devil's spawn, the most unbelieving of all animals has been banned - even by our enemies.

"Children who open a saving account at Fortis get a present: a roguish piggy-bank, named Knorbert. Throughout the years tens of thousands of kids had received it, but that is now at an end. Knorbert won't be given to kids as a present any more.

A pig is a touchy issue for some of the clients: Jews and Muslims consider it unclean. The bank wrote in an internal document that Knorbert "doesn't fulfill the requirements that the multicultural society places on us any more." the document not to De Telegraaf which published it on the front page. Fortis would have preferred to keep a lower profile on it."

Please notice how we faithful believers of Mo also managed to get the Jews blamed for abandoning the vile, vile, vile swine. Not only have we succeeded in getting rid of IT but we get to blame the Jew unbelievers. 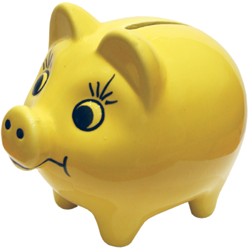 "LEICESTER -- Police here in central England seized a collection of porcelain pigs from a house's window sill after Muslims complained that they were offensive.

"I just couldn't believe it, I didn't know whether to laugh or cry," Mrs Nancy Bennett, the owner of the 17 miniature pigs, told the Sun tabloid newspaper.

The porcelain figures were held at the local police station, while Mrs Bennett was threatened with prosecution if she replaces the collection. Her house is located in the same street as the city's main mosque, meaning that Muslim worshippers often passed by her front window where the pig figurines were on display. "

A historic statue of a wild boar is unlikely to return to Derby's Arboretum, because it could offend Muslims living nearby. The Florentine Boar stood in the Derby park from 1840 to 1942, when it was beheaded by flying masonry during an air raid. Derby City Council had hoped to replace the statue with an identical replica when plans for a massive overhaul of the park were first considered a decade ago. But following reservations raised by some people in Normanton about a new boar statue, the authority decided to consult with local community leaders.

At a meeting of the council's minority ethnic communities advisory committee it was recommended that the boar be replaced with something else because of the strength of feeling among nearby residents as pigs are perceived as offensive creatures by many Muslims. Derwent Ward councillor Suman Gupta said, "If the statue of the boar is put back at the Arboretum I have been told that it will not be there the next day, or at least it won't be in the same condition the next day at least. We should not have the boar because it is offensive to some of the groups in the immediate area."

Najistani - thanks for these striking examples of the fight against the pig.

Some would say it is unbelievable - but the power of "minority ethnic communities advisory committee" - an Orwelian term if I ever saw one - is amazing.

BTW I would suggest that we use the term "monorority" instead of "minority" when ever appropriate.

Minority is a term that has become a hallmark of the political correct ignorants.

It is mostly used so you feel sorry for the group in question. Often the groups in question are not small and work on becoming the majority.

Used as in: "moronority ethnic communities advisory committee" the purpose of the committee suddenly becomes clear.

I am in doubt, however, whether the term "moranority" would be even better.

English native speakers please help out. Moronity would be better?!...

Check out my front porch. Muslims don't like it and hesitate to come calling.

I also have some kind of pig in every room of the house.

Now I need to get a dog, I guess. The county won't allow us to have live pigs. **sigh**

LOL, AOW! When you do acquire a hound, be sure to keep a hefty supply of pig's ears handy for your new pet to chew on!

Von Schlicht,
ONe would be called a racist for using the term moronority.

Pastorius - that would be a problem. However when used not to describe ethnic groups then it should be ok.

OTOH any criticism of Islamofascism or even Islam is always called racism. It is a very successful way of confounding the issues. Thus I would not like to state anything that could be mistaken for racism.

I for one despise all racists foremost. Morons come further down on the list.

What set me off was the "council's minority ethnic communities advisory committee" deciding that the boar upset the Muslims.

How does being Muslim have anything to do about ethnicity? The committee is just a tool used by the Muslims to try to overthrow age old traditions in the country where they live as new comers.

I agree with you. It has nothing to do with racism. But, that's the Western world for you. We're all wrapped up in PC.