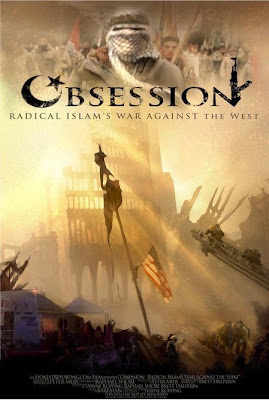 Yes, the Anti-Jihad movement is making its first major move, and it has nothing to do with Filip DeWinter, or any European Ethnic Nationalist party, or Pamela, Diana West and their odd ilk.
Instead, it is simply this. The Obsession Movie is being distributed nationally.
From Watch Obsession:

Between August 25 and November 4, 2008 there will be millions of copies of the award-winning DVD, Obsession, Radical Islam’s War Against the West distributed to Americans all across the United States. Also this powerful movie will also be available online, at no cost! In the near future, every American will be able to Watch Obsession!
AMERICA IS AT WAR
Though we would like to think differently, there really are evil people who spend all their time thinking and planning the destruction of American men, women and children. While Christians and Jews are primary targets, these very bad terrorists do not discriminate in their desire to kill and destroy anyone who does not believe as they do. For our enemy, this is a cultural war, this is a religious war, this is a necessary war. Radical, militant Muslims have declared war on America.
PROBLEM
Americans do not believe - America is at War.
War has a tendency to make average people turn away, both from actual hostility and even from its mere concept. War, though often necessary, is not normal and certainly not welcome. Problems occur when one group of people is united in their desire for war and the other group of people is divided in their understanding or commitment to defend against war. Americans are divided, but radical, militant Muslims are united in their war on America.
SOLUTION
Americans must accept the fact - America is at War.
The term commonly used to describe Americans who either ignorantly or overtly reject that we are really in a War, is the term, “asleep.” The solution for being “asleep” is to “wake-up.” Many Americans who truly understand and believe (as our enemy does) that America is at War, also have discovered an “alarm clock” that is extremely effective at waking up Americans to the war being waged against them by extremist Muslims. That “alarm clock” is, the award-winning documentary, Obsession, Radical Islam’s War Against the West.
ACTION
Americans must get involved -
WATCH OBSESSION
In an effort to “wake-up” America, the Watch Obsession Citizen Education Program is mobilizing Americans across the United States to Watch Obsession and to then actively work, each and every day until the election to have their “universe” of family and friends, Watch Obsession. Americans who truly want to understand the destructive program of radical Islam and its desire to replace the US Constitution with the Koran (sharia law) can Watch Obsession either by viewing one of the millions of copies that are being put into the hands of Americans, or - in the near future - they can Watch Obsession online, at no cost.

The Truth shall set you Free - Let Freedom Reign!
Posted by Pastorius at 4:05:00 pm

This is one of the best, most practical things I've seen anyone do to awaken the American public.

Obsession went to approximately 10 million homes, on Sunday, in 12 key states. The organization is starting a direct mail program throughout the USA, to approximately another 18 million homes. They also plan to be at key events such as the Presidential debates and to make a strong push on college campuses.

I got the above via an email I received.

Predictably, some Moslems have already objected.