Apparently targeting Tea Partiers was Obama’s top priority the past several years. What else could possibly explain having this guy visit the White House far more than any cabinet member?

Publicly released records show that embattled former IRS Commissioner Douglas Shulman visited the White House at least 157 times during the Obama administration, more recorded visits than even the most trusted members of the president’s Cabinet.
Shulman’s extensive access to the White House first came to light during his testimony last week before the House Oversight and Government Reform Committee. Shulman gave assorted answers when asked why he had visited the White House 118 times during the period that the IRS was targeting tea party and conservative nonprofits for extra scrutiny and delays on their tax-exempt applications.
By contrast, Shulman’s predecessor Mark Everson only visited the White House once during four years of service in the George W. Bush administration and compared the IRS’s remoteness from the president to “Siberia.” But the scope of Shulman’s White House visits — which strongly suggests coordination by White House officials in the campaign against the president’s political opponents — is even more striking in comparison to the publicly recorded access of cabinet members.

So at first he claimed it was 118 visits, and laughably said some were for Easter Egg Rolls. Now it’s 157 times. Heck, giving the extensive vacation time for Obama, it appears Shulman was in the White House more than Obama himself. Even Obama’s goon Eric Holder visited less than half as many times as Shulman. Heck, Janet Napolitano and Holder combined logged fewer visits. But move along, nothing to see here, folks. 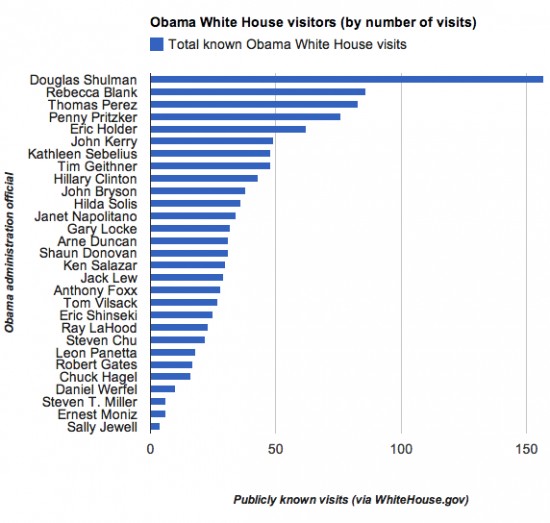 Has anybody thought these visits may be of a "personal" nature?