WaPo After Their Off-The-Record Meeting With Holder: The Justice Department Has Allowed Us To Say "Holder Will Protect Journalist Rights" 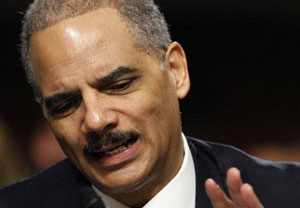 As The Washington Examiner‘s own Susan Ferrechio reports Fridaymost news organizations boycotted on principle Attorney General Eric Holder’s offer to join a press conference Thursday  in which he discussed the Obama’s White House various efforts to monitor, intimidate and harass journalists. Holder’s condition was that the meeting be “off the record,” meaning none of the reporters would be allowed to report what was said at the meeting.

Among those who did attend was the Washington Post. Today’s Post has an account of the meeting — sort of. That is, they have a story about what the Justice Department allowed them to say about its efforts to protect press freedom. The result is just beyond parody (All emphasis is added):

Holder’s commitment came at a private meeting with news executives after criticism that the Justice Department had infringed on the news media in several high-profile leak investigations. Participants said he told them officials would revise guidelines for issuing subpoenas to obtain reporters’ phone records.

"Telling the Truth About Islam May Violate Civil Rights "

Sounds like Holder and company have assumed power to dictate their own re-interpretation of the first amendment.

Webster's dictionary needs an Orwellian rewrite to keep up.