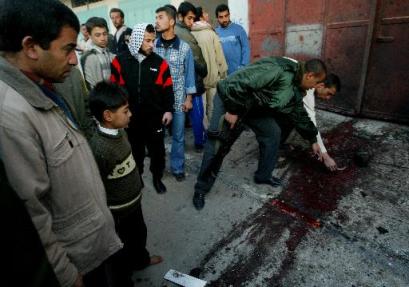 They Have Humiliated The Prophet

The story told, in Muslim communities and schools, is a very simple one but one that is effective in eliciting strong emotion. It goes like this:
"Thanks be to Allah the rule of Islam spread across the world with miraculous speed. The Mo'minin (faithful) took the glorious message of the Holy Qur'an from Mecca and Medina to the darkest corners of the world, bringing light and justice to all the earth.
The rich and the poor of the world, even the Arabs and the non-Arabs, the red skinned and black, stood together, side by side, and worshipped Allah.
There was prosperity, richness and peace beyond imagining, because Allah showered his people with blessings."
And then the mood goes dark and the speaker (or the writer) turns their attention to the infidels.
"The kuffar, the makkar(hypocrites), the people you trust and love, the people that eat in your homes, that eat from the same plate as you do (Arab/Muslim culture of sharing large tray type containers to eat from), who drink water from the same well as you do, the kuffar, though loved and respected by the mo'minin, the kuffar and the makkar, who were given education and enlightenment through the GLORIOUS Qur'an by Allah Subhana-o-Ta'ala, hated Allah and hated the mo'minin and they devised a plan, all together, to destroy the beautiful rule of Allah over the whole earth and kill mo'minin until none was left.
The kuffar TODAY in your own time are still busy, planning together as ONE with Shaytan (Satan), to kill you and your loved ones. Everyday innocent Muslims are killed in the streets of kuffar countries."
And then the message changes to elicit shame:
"Allah asks of YOU. Where are you O Muslim when your brothers are killed by the kuffar mercilessly, their women raped in front of their children (and many a times they go into details of how exactly the imaginary rape happened). The kuffar laugh when they kill, when they rape and when they defile our brethren. And by Allah it would be better for mo'minin to be dead than to see a day of shame like that (culture of shame and honor is really strong in Islamic societies).
Allah asks O mo'minin, IS THIS WHAT YOU WANT FOR YOUR PARENTS? IS THIS WHAT YOU WANT FOR YOUR CHILDREN? For the armies of kuffar are at our gates. They are ready to enter YOUR house and do the same to you and your loved ones that they do to those mo'minin who live in their countries."
And then the stories of Badr and Uhud are told:
"Allah promised Muhammad Sal-Allah-o-Aleyhe-Wa-Aleh-i-Wasalam on the day of Badr that even though his numbers were few he should not fear because ANGELS were going to fight for the mo'minin. And by Allah, we won against the mighty army of Qureish. Today Shaytan has the armies of the WHOLE earth ready to kill each and every mo'min but Allah will make us victorious. WE WILL ONCE AGAIN RULE THE WORLD!"
The crowd usually erupts in a loud "Ameen!", "Masha-Allah" and "Allah-u-Akbar". Students in classrooms usually agree to the message in a more quiet manner.
Usually on Fridays this is where the message would end, but in a lifelong education platform (every day in the mosques, homes and schools) the message ends not with that message of being victorious, however, it ends with a warning:

"But keep in mind brethren, we ruled the world but then we wanted to be like the kuffar so Allah took away his angels and the kuffar destroyed us. Remember the story of Uhud my brothers and take heed, because even when mo'minin fighting alongside Muhammaed Sal-Allah-o-Aleyhe-Wa-Aleh-i-Wasalam doubted Allah and his prophet and valued their lives and booty more than Allah and his prophet, Allah punished them by giving victory to the kuffar. And by Allah they were destined for hell.

Hold Allah and his prophet dear and forget about life in this world for life in paradise is so much better, so much sweeter than here. This earth is temporary. But what you do in this earth will decide on the day of judgment whether you go to paradise or hell. And as our prophet said there is no guarantee that you would go to paradise but if you fight for the cause of Islam and for the cause of Allah.

Let us all follow the example of Muhammad Sal-Allah-o-Aleyhe-Wa-Aleh-i-Wasalam and forget the devices of shaytan in this world for if we do so we will be victorious both in this world and the judgment day."

This last part is what solidifies it in one's brain that in the end all that matters is doing the bidding of Allah. Because if you disobey him, not only are you going to pay dearly (by getting murdered, raped or tortured somehow) in this world but also in the hereafter.

Now if you were Muslim, wouldn't this story resonate with you? It did with me, for a very long time.

And not everyone who then goes on and blows someone up or kills an innocent person does it out of a "pure heart for Allah". Many are already criminally disposed but this gives them the justification they need. And in the end, what does it matter anyway? They are told to follow Mohammed, and Mohammed himself was a criminal, a bandit.

Many a times Muslims who carry out attacks against innocent people do hold on to just one or two verses from the Quran and a couple of stories from the Hadiths but that is not a sporadic thing. It is a long process of education.
Posted by Nicoenarg at 6:00:00 pm