The IRS Has Already Abused Its Powers under ObamaCare 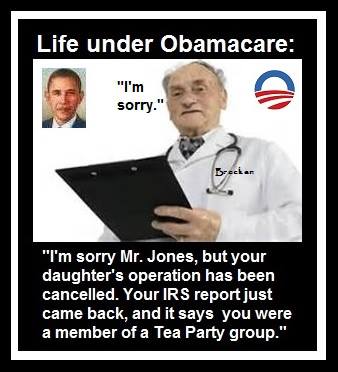 The IRS Has Already Abused Its Powers under ObamaCare.HT: Cato@Liberty.By Michael F. Cannon.

Over at Bloomberg, National Review’s Ramesh Ponnuru writes about the Obama administration’s disregard for the rule of law, including the IRS’s $800 billion power grab:

The Patient Protection and Affordable Care Act, the sweeping health-care law that Obama signed in 2010, asks state governments to set up health exchanges, and authorizes the federal government to provide tax credits to people who use those exchanges to get insurance. But most states have refused to establish the online marketplaces, and both the tax credits and many of the law’s penalties can’t go into effect until the states act.

Obama’s IRS has decided it’s going to apply the tax credits and penalties in states that refuse, even without statutory authorization. During the recent scandal over the IRS’s harassment of conservative groups, many Republicans have warned that the IRS can’t be trusted with the new powers that the health law will give the agency. They are wrong about the verb tense: It has already abused those powers.


For more, read my article (with Jonathan Adler), “Taxation Without Representation: The Illegal IRS Rule to Expand Tax Credits Under the PPACA.”
Posted by Pastorius at 12:17:00 am