What's Wrong With This Paragraph? 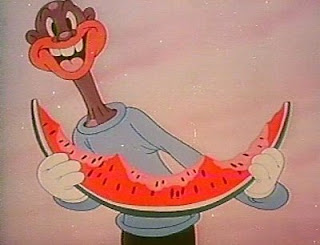 Lawdy, I's so happy the Liberal
White Folks is here
to protect po' little ole me


On Wednesday the Senate agriculture committee approved a GOP proposal that would amend the farm bill the Senate is considering to ban “convicted murderers, rapists, and pedophiles” from getting food stamps. On its surface, the idea sounds unobjectionable, but the measure would have “strongly racially discriminatory effects,” according to the non-partisan Center on Budget and Policy Priorities (CBPP).

I mean, how god damned stupid is Mother Jones?

reference = GOP Food Stamps Proposal Would Discriminate Against African-Americans
Posted by Pastorius at 3:13:00 am

Can't say I agree with this idea, racial aspects aside.

I understand most of the restrictions placed on convicted felons, but they have done their time.

Your point is well taken, Christine.

The racial thing is ridiculous, however.

In fact, it is outright RACIST.

I agree, the race card does not belong here.

I almost choked on my breakfast (mmmm, I love the smell of bacon in the morning) reading this crap.

Liberals would throw their mother under the freakin' bus if it meant they could, as a result, fling some dirt at the GOP or conservatives.

"A move against convicted murderers, rapists and pedophiles is racist against blacks because..."? Because why liberals? How did you put that together?

Liberals should be REQUIRED to say their ideas out loud to themselves and their neighbors before they put them down in writing. But this wouldn't change anything because to understand the idiocy of their work one needs a functioning brain.

As for whether convicts should or shouldn't get food stamps...meh, I have to agree with Christine, they have done their time according to the law.

I can't stand the whole idea of food stamps altogether...but that is a different discussion.