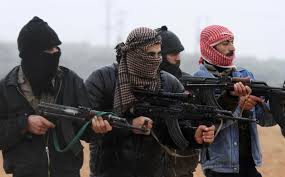 Members of the Free Syrian Army reportedly attacked the Christian-dominated al-Duvair village in Reef on the outskirts of Homs on Monday, where they massacred its citizens, including women and children, before the Syrian Army interfered.

This reported attack comes shortly after intense fighting in the city of al-Qusseir over the weekend, in which Bashar Al-Assad’s forces inflicted heavy casualties on the rebels.
Assad’s forces launched an offensive in April in an effort to cut off supply lines to the rebels by taking the city and its surrounding areas from the rebel groups that had been entrenched there since last year. Two weeks ago, the Syrian forces reached the center of the city

While the sources describing Monday’s massacre are supportive of Assad, it’s possible that it occurred since the rebel groups fighting the Assad regime are composed mainly of members of al-Qaeda and al-Qaeda affiliated groups and have committed war crimes and atrocities in the past.

Jabhat al-Nusra, the branch of al-Qaeda that fought and killed American and allied troops in Iraq, have positioned themselves in Syria and control the rebel movement.

and the CHRISTian "leaders" of the US are doing WHAT -ABOUT IT!!!??
Nada-
our brothers and sisters are being annihilated by islam and all we get is--weak appeasement crap!!
C-CS