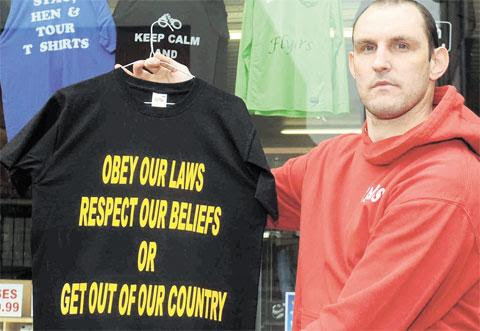 ARREST THREAT: Matthew Taylor and the T-shirt police have forced him to remove from display
A NEWPORT shopkeeper has been forced by police to remove a T-shirt from his shop window because they felt it “could be seen to be inciting racial hatred.”
Matthew Taylor, 35, the owner of Taylor’s clothes store on Emlyn Walk in the city, printed up and displayed the T-shirt with the slogan: “Obey our laws, respect our beliefs or get out of our country” after Drummer Lee Rigby, 25, was killed in near Woolwich barracks in London last week.
But following a complaint from a member of the public, police came to his store and threatened to arrest him unless he removed the Tshirt from sight.
Click to continue:
Posted by Pastorius at 12:07:00 am