Why Didn’t Anyone Come To The Defense Of The British Soldier Who Was Hacked To Death? 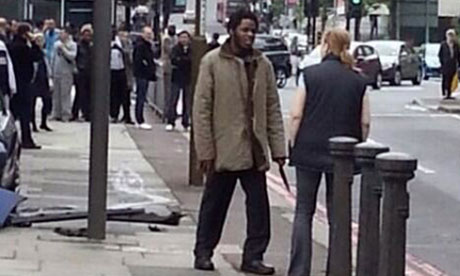 Excuse me there, chap,
might I somehow convince you to
put down the meat cleaver and engage
in a bit of dialogue?


The recent attack on a British soldier by assassins wielding meat cleavers while bystanders looked on raises the question: “Why didn’t anyone try to help the victim?”
Because British citizens are prohibited from carrying objects that could be used as “offensive weapons.”

While it is well known that Brits cannot carry guns, a lesser known law prohibits any subject of the Queen from carrying a knife of consequence, pepper spray or a stun gun.
According to the United Kingdom government website, the online storehouse of British government regulations, it is illegal to:
Folding knives, regardless of blade size, with a locking mechanism are illegal in the U.K. for carry in public and are referred to as “lock knives.” According to British law, “The maximum penalty for an adult carrying a knife is 4 years in prison and a fine of £5,000.”
Pepper spray is also illegal under section 5(1)(b) of the Firearms Act 1968, which prohibits “any weapon of whatever description designed or adapted for the discharge of any noxious liquid, gas or other thing.”

According to the UK website, “Having an offensive weapon in a public place without lawful authority or a reasonable excuse can also lead to a fine and/or up to four years in prison.”

Here's what I don't understand. This jihadi was in front the barracks for 20 minutes. No one thought to knock on the door of the barracks and tell the guard there - I assume army barracks have guards of some sort at he front door unless any Tom Dick or Mohammed can stroll into an army barracks anytime - that a soldier was being attacked???

And don't you think some armed soldiers would come out and grab the guy?

I don't get it. What the hell is going on in Britain??

Why are the military ordered to cower under their bunks?? The highest security unit in the nation??

I hope the Brits will choose to break the law by carrying a stun gun from now on. I'd rather face a court for carrying a self-defense object than be butchered at the shouts of Satan is great!

As what is wrong with the Brits in general? Their balls went the way of the guns ... None left among the civilian population.

Because stopping a Muslim from murdering someone in broad daylight would just not be politically correct at all. I mean, our society says murder is wrong but who are we to impose our culture on Muslims. True to multiculturalism, let him do what he must, our rights and lives be damned!

The Brits will have to learn this saying: